The Young and the Restless Spoilers: Nick Poisons Victor With His Own Medicine – Will The Moustache Recover?

BY Sean O'Brien on July 15, 2018 | Comments: one comment
Related : Soap Opera, Spoiler, Television, The Young and the Restless 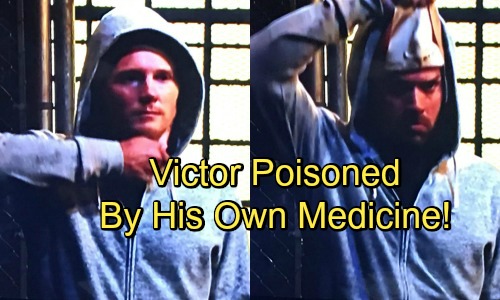 The Young and the Restless spoilers tease that what Nick (Joshua Morrow) did to his father was diabolical, heinous, amoral, and all around wrong. How does it feel to swallow that doppelganger medicine, Victor (Eric Braeden)?

Nick followed through on a threat in a way that he’s never done before. Morrow’s incensed character hoodwinked the Moustache into believing that J.T. was behind the plot to bring down Newman Enterprises. Victor also believed that Mr. Hellstrom had personally humiliated him by dumping sensitive medical documents into the public domain.

In what easily has to be one of the great Genoa City storyline shockers in recent memory, Nick, of all people, delved deeper than ever into his inner Newman. He turned one of his dad’s most vile tricks against him, by using identity a weapon.

Strong kudos to supervising producer Lisa de Cazotte, executive producer and head writer Mal Young, and their team for creating and executing one fantastic mystery that very few viewers (and certainly not this scribe) solved ahead of time. This particular extended storyline also maintains potential because Young has said that J.T.’s tale is not over, which means more twists are yet to come.

The return of Luckinbill to the cast allowed fans to see the well-liked actor appear to fill his role. Whether J.T. was the person who returned to Genoa City last December, or lies in his Chancellor Park grave, which was subsequently covered over with cement by Jill’s (Jess Walton) donated piece of modern art in honor of Katherine (Jeanne Cooper), remains in question, which is fantastic.

As part of Nick’s just-revealed gaslight against Victor, it remains possible that J.T. is alive, or that Luckinbill will be seen again in a different role. Those tantalizing possibilities, or others not considered are appreciated by hardcore soap fans.

However, Victor once again proved that he can’t take his own medicine. He wants to dish out punishment, while never believing that it should be received. Nick got your goat good, Victor! So, how do you like dealing with a doppelganger? CDL is a leading source for everything linked to The Young and the Restless. Check back regularly for Y&R spoilers and news!