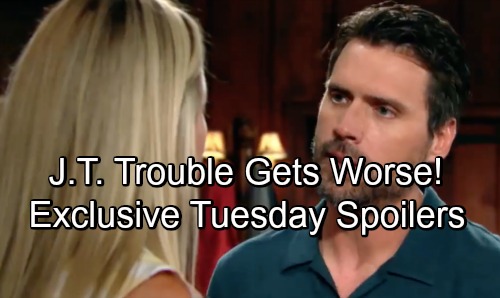 The Young and the Restless (Y&R) spoilers for Tuesday, July 17, tease that Hilary (Mishael Morgan) will keep something under wraps. She’ll feel the need to hide a secret, so what’s this all about? There are couple options to consider. Hilary might experience a few more cramps and decide not to tell Devon (Bryton James).

Nate (Brooks Darnell) checked Hilary out and didn’t think there was a problem. If Hilary battles more pain, she might brush it off as nothing. Hilary may not want to worry Devon, especially since he’s dealing with some Hamilton-Winters trouble. Thanks to the insider tip Ashley (Eileen Davidson) gave Neil (Kristoff St. John), Victor cut ties with the communications part of their company.

Then again, Hilary could do something sneaky that provokes Lily’s (Christel Khalil) fury. They’ll have a fierce showdown on Wednesday’s new Y&R episode, July 18, so Tuesday’s episode could set up the conflict. In the meantime, Victor (Eric Braeden) will take the necessary steps. After discovering that Nick was behind the Newman bombshells, Victor will shift his strategy and prepare for war.

The Young and the Restless spoilers say Victor will want Nick to pay for what he’s done, but he can’t use the custody situation now. What’s left for Victor to try? The great Victor Newman will undoubtedly think of something! Y&R fans can expect some devastating blows on both sides, so stay tuned for their intense battle.

Over with Nikki (Melody Thomas Scott) and Victoria (Amelia Heinle), they’ll cope with an unexpected attack. Sharon (Sharon Case) made a pact with the other cover-up crew members. She really shouldn’t leave them in the dark on Nick’s impersonation scheme. It’s not fair to let the rest of the gang believe they’re in danger.

Plus, they all need to know that J.T.’s (probably) still deceased. The case is unresolved, so Paul (Doug Davidson) definitely wants answers. Because of Nick, everything’s been stirred up all over again and J.T. trouble will ramp up. Will Paul inch closer to the truth? This hot plot has become a mess, but it’s only going to get messier!