The Young and the Restless Spoilers: Nick Pretends To Be J.T. – But The Real One’s Still Out There, Thad Luckinbill Not Done 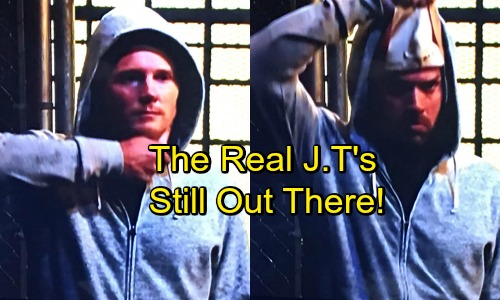 The Young and the Restless spoilers tease that Nick (Joshua Morrow) unmasked himself, revealing that he has been the man behind the seeming J.T. (Thad Luckinbill) resurrection. However, considering executive producer and head writer Mal Young’s recent statements about Luckinbill having returned to the cast, it remains possible that all of Genoa City and it’s daily audience, which numbers in the millions, may not have seen the last of J.T. Hellstrom.

Okay, viewers could see that Luckinbill did return to film recent scenes that actually showed him outside Shick’s cottage and standing in that back alley facing Victor (Eric Braeden). While Y&R wrote Nick as having worn a J.T. mask, the fans know it actually was Luckinbill until the camera shot shifted and Nick pulled the disguise off.

Hopefully, and that’s a seriously aimed statement, Y&R does not allow this to be the end of the story involving Luckinbill. This strong actor’s spring exit didn’t feel right because it didn’t match J.T.’s backstory. However, allowing Luckinbill to return in some other form would, at least, allow loyal fans to explore an alternative reality.

Young is claiming that viewers have only seen about half of Mr. Hellstrom’s story. Much more is apparently coming, which must mean that Nick’s vicious ruse, which is also out of character, is simply the second part of a multi-step storyline. However, Nick will surely owe the coverup crew an explanation, though he won’t fully know why they will demand answers.

It simply wouldn’t have been, or won’t be believable if Y&R eventually resurrects the person who was dumped into Chancellor Park’s makeshift grave. There is no way that anyone who suffered the type of head injury would have had enough oxygen to survive being buried alive, even including if someone quickly dug him out after Nikki (Melody Thomas Scott), Vickie (Amelia Heinle), Phyllis (Gina Tognoni), and Sharon (Sharon Case) left.

Morrow’s revenge game against his dad, in response to the legal action taken regarding Christian (Jude and Ozzy McGuigen), is, apparently just the latest segment of this story. The first being Luckinbill’s on-screen return in December and seeming write-out in the spring.

Young has promised Y&R fans that there’s more to J.T.’s story, which means that Luckinbill could be coming back to play the same character shortly.

It’s also possible that Luckinbill wasn’t playing J.T. during his second stint on the show, but instead was portraying an imposter or an evil twin. That would explain all of the odd behavior Vickie, Victor, and the viewers experienced. CDL is a leading source for everything linked to The Young and the Restless. Check back regularly for Y&R spoilers and news!