BY Heather Hughes on July 15, 2018 | Comments: one comment
Related : Soap Opera, Spoiler, Television, The Young and the Restless 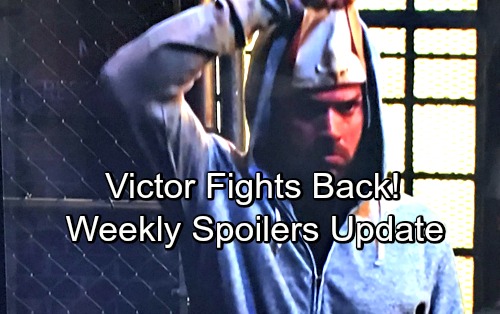 The Young and the Restless (Y&R) spoilers updates for the week of July 16-20 tease that secrets will explode on the CBS soap. First, Nick (Joshua Morrow) will reveal his darkest scheme yet. He’s been impersonating J.T. (Thad Luckinbill), so all those leaks and threats came from Victor’s (Eric Braeden) vengeful son.

Nick’s even been sporting a J.T. mask, which he’ll peel back during their heated showdown. Victor may not be as worried once he finds out Nick’s behind the chaos. However, he should really stop underestimating him. Nick’s no longer the wimp he used to be, so more blows are coming for Newman.

By the end of the week, The Young and the Restless spoilers say Nick will sink deeper into the darkness. He set out to completely destroy Victor, which means there’s additional work to be done. Nick won’t stop until Victor truly suffers for taking Christian (Jude and Ozzy McGuigen). Victor went too far, so Nick’s grudge isn’t going away anytime soon.

Sharon (Sharon Case) will be horrified by this new side of Nick. She’ll grow increasingly concerned about his behavior. Victor’s the kind of guy who fights back, which means a revenge plot should be brewing. Of course, this also means J.T.’s probably still dead and buried. That’s something the cover-up crew will have to address.

Y&R spoilers say Nikki (Melody Thomas Scott) and Victoria (Amelia Heinle) will get a huge shock. Will Sharon fill them in on Nick’s secret? Sharon may feel like she has to in light of their own. They still have to worry about evidence surfacing in the J.T. case, but at least they won’t have to fear J.T.’s wrath anymore.

As for Phyllis, she may hear about Nick’s plan another way. The Young and the Restless spoilers say they’ll have a little bonding time this week. Will they confide in each other? Phyllis (Gina Tognoni) will find out Billy’s (Jason Thompson) gambling again before she meets with Nick. That would give her something to spill, so Nick might do the same.

Some major developments are ahead, so don’t miss this week’s stunning episodes. We’ll give you updates as other Y&R news comes in. Stay tuned to the CBS soap and don’t forget to check CDL often for the latest Young and the Restless spoilers, updates, and news.