The Young and the Restless Spoilers Next 2 Weeks: Billy’s In The Doghouse – Hilary’s Tragedy – Naughty Secret Exposed

BY Marcy Cohen on July 14, 2018 | Comments: one comment
Related : Soap Opera, Spoiler, Television, The Young and the Restless 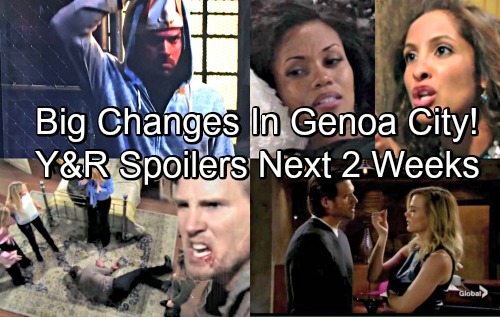 The Young and the Restless (Y&R) spoilers for the next two weeks tease that we’ll see some serious relationship drama. During the week of July 16-20, Sharon (Sharon Case) and Nick (Joshua Morrow) will clash over a secret. After Nick pulls off a J.T. (Thad Luckinbill) mask, Victor will learn his son’s been targeting him. Once Vic hints about it to Sharon, Nick will ultimately come clean.

Sharon won’t like this vengeful side of Nick. She’ll understand that he had to play dirty for Christian’s sake (Jude and Ozzy McGuigen), but did he go too far? If Nick isn’t careful, he’ll turn into his evil father! Over with Billy (Jason Thompson), he’ll get busted by Phyllis (Gina Tognoni). She’ll become privy to Billy’s gambling relapse and promptly leave him in the doghouse.

Other Young and the Restless spoilers say Abby (Melissa Ordway) will have to pick a side. Does that involve Nick and Victor’s battle? Abby may see why her brother went as far as he did, but her loyalty most likely lies with Victor. If Abby wants to get ahead in her career, she’ll have to stay in line.

Elsewhere, Hilary (Mishael Morgan) and Lily’s (Christel Khalil) faceoff will take a devastating turn. It looks like Hilary will land at the hospital after their confrontation. She’ll most likely learn she lost the baby. Devon will deal with a major shocker by the end of the week.

Meanwhile, Ashley (Eileen Davidson) will seek a new alliance. Who will she form a partnership with? Could it be Kyle (Michael Mealor)? They’d both like more power at Jabot, so pushing Billy out of the CEO spot could be helpful. It might be fun to watch Kyle and Ash get sneaky, but it’s too early to say what Ashley has in mind.

Jack (Peter Bergman) will also get his DNA results this week. He’ll learn he isn’t a Chancellor, but that may not get him off Cane’s (Daniel Goddard) back. The week of July 23-27 will leave Cane fighting for the Chancellor legacy. Jack may decide he doesn’t need to be Phillip’s (Donnelly Rhodes) son to go after what he wants.

Across town, Mariah (Camryn Grimes) will blow her top. Will she find out what Nick (Joshua Morrow) put Sharon (Sharon Case) and the others through? Mariah would undoubtedly hit the roof over the J.T. impersonation. However, we can’t rule out another stunning exposure. Tessa’s (Cait Fairbanks) still keeping secrets and that can only lead to trouble.

Other Young and the Restless spoilers say a naughty rendezvous will be discovered. Ashley and Neil’s make-out session wasn’t exactly scandalous. They’re single, so that was perfectly fine. Who’s really been naughty lately? Perhaps Y&R will surprise sometime between now and then!

Finally, Devon will keep his vow. Maybe he’ll insist on standing by Hilary after her potential miscarriage. Since Hilary’s leaving soon, that plan obviously won’t pan out. We’ll give you updates as other Y&R news comes in. Stay tuned to the CBS soap and don’t forget to check CDL often for the latest Young and the Restless spoilers, updates, and news.