The Young and the Restless Spoilers: Nick’s Battle with the Dark Side Reignites, Losing Sharon Unleashes Victor 2.0

BY Kinsley Goldman on October 14, 2018 | Comments: one comment
Related : Soap Opera, Spoiler, Television, The Young and the Restless 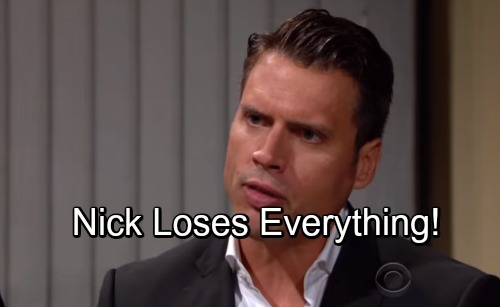 The Young and the Restless (Y&R) spoilers tease that Nick (Joshua Morrow) has some tough struggles ahead of him. He was crushed when Sharon (Sharon Case) dumped him at the altar, but he refused to give up. Unfortunately, Sharon’s rejected Nick a few more times since then. She’s adamant that a “Shick” reunion’s out of the question, so Nick’s hope could fade.

That’s especially true since Sharon and Rey (Jordi Vilasuso) are growing closer. Of course, that could be another disaster waiting to happen. Since Rey’s determined to get answers about J.T. (Thad Lucknbill), Sharon and the other cover-up crew members are at risk. However, there’s still time for Rey to back off Sharon. He might be willing to help her out once he gets all the facts.

Sharon and Rey’s bond will get even stronger, so Nick’s chances of reconciliation will grow slimmer. He’ll probably have to accept that Sharon’s too hurt to reunite. She just wants to move on and escape the pain of the past. The Young and the Restless spoilers say a fresh start with Rey could achieve that for Sharon, but what about Nick’s future? He may find a non-romantic plan to cope with his sorrow.

In an interview with CBS Soaps in Depth, Joshua Morrow weighed in on Nick’s dark side. We should be seeing a lot more of it as Sharon slips through Nick’s fingers. Nick will throw himself into his aptly named company and stir up plenty of Dark Horse drama.

Many Y&R watchers prefer a less aggressive Nick, so is Morrow concerned about viewers turning against his character? “Sometimes fans want storylines played out in a specific way,” Morrow said. “But I want them to be a little bothered by Nick. That keeps it interesting.”

Morrow also talked about the dangerous line Nick’s teetering on. He backed off the ledge for Sharon’s sake, but what happens now? Will Nick find himself becoming more and more like his ruthless father, Victor (Eric Braeden)? Morrow wouldn’t mind one bit! “I hope they let me take Nick as far as they will let me go,” he said. “That pull of the dark side…can be a powerful thing.”

Morrow also dropped a hint about some power plays. It may not be long until a corporate battle’s heating up again. “He’s going to have to do some shady things if he’s going to be powerful enough to compete against his dad,” Morrow said. “And that is going to be the interesting part of the story — I pray that the writers really let us explore that!”

In the coming weeks, The Young and the Restless spoilers say Nick will have trouble finding his footing. He’ll have to figure out who he wants to be without Sharon by his side. Don’t surprised if Nick fully embraces his Newman roots and hurls himself into darkness.

Nick could be setting himself up for a huge fall, so don’t miss the cutthroat chaos. We’ll give you updates as other Y&R news comes in. Stay tuned to the CBS soap and don’t forget to check CDL often for the latest Young and the Restless spoilers, updates and news.