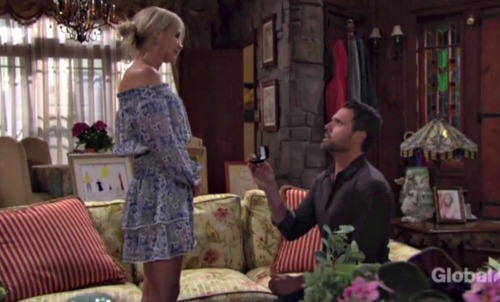 The Young and the Restless spoilers tease that ‘Shick’ will be remarried this summer. After being thwarted by an awoken Phyllis (Gina Tognoni), at the altar in 2014, much to the fans chagrin, Nick (Joshua Morrow) and Sharon (Sharon Case) will finally cross the real relationship revival line after spending more than a decade as unmarried true loves.

As Y&R fans know, Nick’s move-back to the cottage, which was ‘Shick’s’ first home, developed rapidly. Chelsea (Melissa Claire Egan) left town with Connor (Gunner and Ryder Gadbois) after her money scheme was revealed. Nick and Sharon had been growing closer in the months leading into that cast exit, so they were positioned for a couple’s restoration that was being built between the script lines.

It’s a bit far-fetched, but not overly so, that Nick released his past feelings of distrust where Sharon is concerned. The Sully (Jude and Ozzy McGuigen in a faux dual role) incident would have been too much for anyone to bear. But not for Nick, who can forgive almost anyone, save for Victor (Eric Braeden).

Yes, the Moustache’s latest manipulation has, to a certain degree, fueled Nick’s desire to reconcile. He’s out to prove to his father that any action taken won’t prevent him from living his life on his terms.

The recent one-on-one scene at the Genoa City Athletic Club was followed by a Father’s Day verbal debate with the Newman clan as an unwilling audience. Neither man screamed, yelled, or stomped. But the palpable rancor between them enveloped all who were near them.

Christian’s custody having been stunningly secured by Victor adds yet another level of bitterness between a father and son who are role models for no man and his offspring, or vice versa.

Braeden has often spoken about how he doesn’t like it when Victor is mean to Nikki (Melody Thomas Scott). One can assume that his feelings are similar where his alter ego’s negative interactions with Nick are concerned, as Braeden has a positive real life relationship with his own son as his social media account has often shown.

Nick believes that by marrying Sharon he’s preventing his father from controlling his choice of love life. She is the mother of two of his children and is in a much better place than in past years. So Shick should work longterm, while also serving as a source of strength in Nick’s ongoing, latest battle against the infamous Victor Newman who has his surviving son in his crosshairs.