The Young and the Restless Spoilers: Nick’s Open To Sharon – Will Shick Fall In Love Again?

BY Sean O'Brien on March 12, 2018 | Comments: one comment
Related : Soap Opera, Spoiler, Television, The Young and the Restless 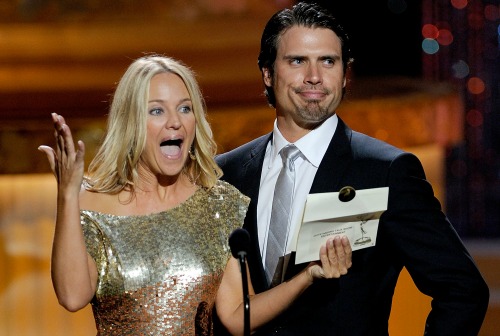 The Young and the Restless spoilers tease that an extended opportunity for Nick (Joshua Morrow) to bond with Sharon (Sharon Case) will work to Shick’s advantage. That means the opportunity for this once-power couple to reform increases with each day that they are living together at the cottage.

Currently, Sharon and Nick aren’t in love with each other. But their shared backstory and all experience gained since they split in the last decade will allow new feelings to grow.

Falling in love with a current version of someone feels different than whenever the first blush was felt. Many within the audience surely can relate, as a past loved one is seen anew in present time.

At one point in time Nick wronged Sharon. He left her while they were grieving the loss of Cassie (Camryn Grimes). His take-up with Phyllis (then played by Michelle Stafford) led to marriage and produced Summer (Hunter King), who this scribe would like to see written back into the show as her Life in Pieces schedule allows. No apologies are offered to King’s detractors in this regard.

Skipping ahead in time to the mid-part of this decade, Sharon went off the rails and pretended that Christian (Jude and Ozzy McGuigen) was Sully (Jude and Ozzy McGuigen in a dual role, double wink) in order to meet a misguided need that involved Dylan (Steve Burton) and her own invented emptiness. When all was rectified, after a deeply extended storyline, Christian was back with the man who thought he was his dad.

A cool, creative choice enabled Sharon to break the news to Nick that Christian was, in fact, Adam’s (Justin Hartley) son all along. Sharon didn’t know that information until 2018 and told Nick as soon as she was able to do so, despite criminal resistance from Chelsea (Melissa Claire Egan) and resist rationalization efforts made by Phyllis.

Sharon’s courageous efforts, which is an accurate way to tag what Nick’s first true love did, resulted in him finally knowing the painful truth. He valued her honesty and therefore was open to the offer to move back to the setting that was Shick’s first home.

Of course it will be good for Faith (Alyvia Alyn Lind) to have both of her parents living under the same roof. Soapy characters rationalize that kids can adapt to co-parenting in Genoa City in order to wish away their selfish impulses, as was true when Phick first formed more than 10 years ago.

Christian will also benefit by reconnecting with Sharon. Experience with him in the past and her honest intentions now make her a positive mother figure. It’s good that Mariah (also the great Camryn Grimes in her second Y&R role) is present as well, as she’ll serve as Sharon’s sounding board when needed.

Of course this creation is far from the classic and effective nuclear grouping. But if Sharon and Nick make personal progress it’s possible that this daytime meld can be a good family to their children. CDL is a leading source for everything linked to The Young and the Restless. Check back regularly for Y&R spoilers and news!