The Young and the Restless Spoilers: Nikki’s Coma Leads To New Year’s Miracle – J.T.’s Murder Solved, But Not How You Expected

BY Sean O'Brien on December 16, 2018 | Comments: one comment
Related : Soap Opera, Spoiler, Television, The Young and the Restless 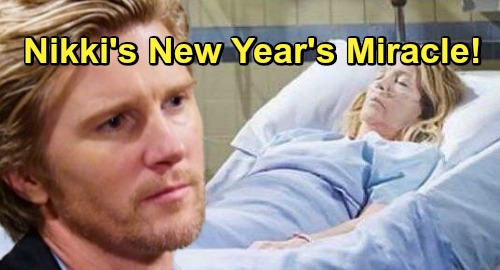 The Young and the Restless spoilers tease that Nikki (Melody Thomas Scott) falls into a coma after being struck down on the streets of Genoa City by Reed (Tristan Lake Leabu). Following Victor Newman’s (Eric Braeden) pre-Christmas return, the Newman family experiences various miracles in the New Year.

Nikki’s life-threatening state temporarily relieves the enormous pressure she’s endured due to her own misguided actions, as well as those of the remaining coverup crew members. If she’d only followed what Sharon (Sharon Case) and Victoria (Amelia Heinle) wanted to do, contact the authorities, this entire storyline, which began with Nikki’s head-conk of J.T. (Thad Luckinbill) in mid-April, could have been avoided. But such is soap and here she and Y&R’s loyal audience lie as of December’s advance past its midpoint.

Okay, so Scott’s character is not going to join her fabled mentor, Katherine (Jeanne Cooper), just yet. Nikki will pull out of the coma while her one true and only love, Victor, is at her side. Upcoming Niktor scenes will actually prove rather touching, as all viewers who have experienced the reality of a soul mate will see.

During the time of Nikki’s battle and thereafter, Victor will be forced to defend himself from Rey’s (Jordi Vilasuso) understandable, but off-base, allegations. Like Paul (Doug Davidson) before him, Genoa City’s lead enforcement officer thinks that Victor is a dirty player.

Rey’s circumstantial evidence is weighty. Under normal circumstances, Victor might be framed tightly and be kept behind bars for an extended period of time. But Y&R’s current atmosphere indicates that Braeden’s return scenes will lead to a full break in the mysterious and open case concerning J.T.’s demise and missing body.

What would be most miraculous is if J.T. is alive. Taking that far-fetched lead would allow Nikki’s perceived fatal action to have not been realized. That would mean she, Vickie, Phyllis (Gina Tognoni), and Sharon (Sharon Case), would not have unlawfully buried Mr. Hellstrom at Chancellor Park. Instead, they would have simply committed much lesser crimes, with however Rey would term them.

At this point, there can be no fully believable scenario that allows Nikki to escape all punishment for killing J.T., even though it was a form of self-defense of Victoria.

Also, Y&R can’t allow Detective Rosales and Christine (Lauralee Bell), presumably, to not pursue justice against the coverup crew for all they’ve done to-date. So, some type of miracle will be created that delivers a solution where all connected character’s lives aren’t impacted longterm.

With all of the above, fans will then be presented with an explanation of all open questions in the new year. That, in and of itself, is a miracle, considering devoted daytime fans are into their fourth season of the current year with this particular arc.