BY Sean O'Brien on December 16, 2018 | Comments: one comment
Related : Soap Opera, Spoiler, Television, The Young and the Restless 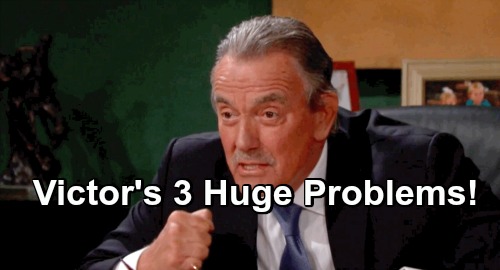 The Young and the Restless spoilers tease that Victor (Eric Braeden) will respond to three problems upon his return to Genoa City. His reactions won’t all be instantaneous, but Victor will respond to each complex situation with classic vigor.

The Moustache. The Black Knight. Just call him ruthless, if one likes. But however he’s addressed, the great Victor Newman remains a force of nature on Y&R.

Drawn back into what has become an epic arc, Victor learns that Nikki (Melody Thomas Scott) is hit by an unknown assailant, who was an unaware, reckless Reed (Tristan Lake Leabu) foolishly driving Charlie’s (Noah Alexander Gerry) car.

Despite Nate’s (Brooks Darnell) efforts in the operating room, it initially appears that Nikki’s fate might be the same as Dr. Hastings most recent prominent patient, Hilary (Mishael Morgan).

So, Victor’s first problem-solve involves being by Nikki’s near-death bed side. A recent social media post teased Braeden’s return just prior to Christmas Day, via the image of him and Scott at the hospital room set. Of course, both actors are healthy in real life and so too will Nikki be again after some tenuous days and nights are endured by her loved ones.

Upon his temporary exit a handful of months ago, Victor was said to have been on a business trip. With the last week, or so, Nikki was increasingly concerned because Victor was out of touch and seemed to be missing.

Considering the masked identity of the coverup crew’s harasser, it’s understandable that she and Vickie (Amelia Heinle) were worried about Victor having been targeted. But their fears are obviously allayed through his return.

The Black Knight will remain in the dark no longer, as he’ll come to learn about the ongoing investigation into J.T.’s (Thad Luckinbill) death, that now centers upon him being the main suspect. Rey’s (Jordi Vilasuso) pressure will be fiercely fought, eventually resulting in Victor’s clear and the full exposition of the coverup crew’s deeds.

Victor’s second problem solve is a twofer. He restores his innocence and helps Nikki and Vickie respond to the varied legal entanglements they’ve gotten themselves into.

The purpose of Victor’s trips abroad involved restoring Newman Enterprises good name, while also prepping a plan to counter Nick’s (Joshua Morrow) Dark Horse. So, the third problem solve won’t be as direct. Newman will regain much of its mojo, while Nick’s payback business will simply be neutralized, at first.

Braeden’s return is welcomed by his fans. Y&R would not be what it is without him and his inimitable alter ego, Victor Newman. CDL is a leading source for everything linked to The Young and the Restless. Check back regularly for Y&R spoilers and news!