The Young and the Restless Spoilers: Phyllis and Nick Become Genoa City’s Next Power Couple – Jabot and Dark Horse Duo Get Fierce 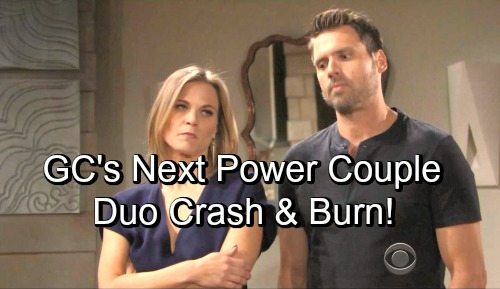 The Young and the Restless (Y&R) spoilers tease that Phyllis (Gina Tognoni) will settle in as CEO and form some new strategies. She’s already got some great ones that Kerry’s (Alice Hunter) helping her out with. Phyllis wants to bring more women on staff and focus on quality leadership. She’s all about trusting her instincts and changing the culture of Jabot.

However, Phyllis will be facing an uphill battle. Ashley (Eileen Davidson) walked away with all her patents and plans to start a brand-new company. She’ll have the sole rights to products that loyal customers have been using for years. It’s easy to imagine those customers abandoning Jabot and giving their money to My Beauty.

Kerry will be working overtime to come up with new lines and help propel Jabot into the future, but will it be enough? Phyllis may need some outside assistance if she wants to keep the company afloat. Fortunately, there’s a handsome and determined businessman in town. He’s willing to take risks and knows a good deal when he sees one. He also happens to be quite chummy with Phyllis.

Of course, we’re talking about Nick (Joshua Morrow) over at Dark Horse. He started the company as a way to show up Victor (Eric Braeden), but it’s taken on a whole new meaning for him. Now Nick’s just concentrating on success in general. Sharon’s (Sharon Case) out of his life, so it makes sense that Nick will throw himself into work a bit more in the weeks ahead.

The Young and the Restless spoilers say Nick and Phyllis will be drawn to each other. Perhaps their growing bond could come through work – at least at first. Phyllis might go to Nick and make a proposal. Even if they don’t go for a full-fledged Jabot-Dark Horse merger, they could surely make some sort of beneficial deal.

Y&R fans can definitely expect Nick and Phyllis to spend more time together. It won’t be long until they’re caught up in a hot romance. We all know Phyllis doesn’t mind having sex at the office or anywhere else for that matter! Some steamy scenes will be hitting your screen before you know it.

The Young and the Restless could make Phyllis and Nick a dynamic duo. They could become the next Genoa City power couple and prove they’ve got what it takes to succeed. Would you like to see these two take the world by storm? Do you hope they crash and burn instead?

It sounds like some interesting possibilities are cooking up on the CBS soap. We’ll give you updates as other news comes in. Stay tuned to Y&R and don’t forget to check CDL often for the latest Young and the Restless spoilers, updates, and news.