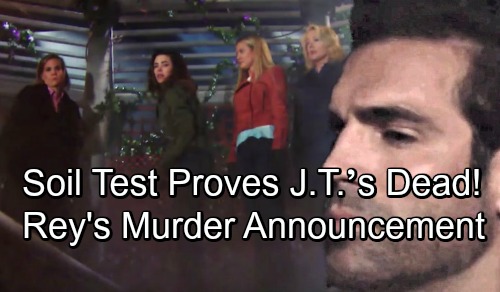 The Young and the Restless (Y&R) spoilers tease that Arturo (Jason Canela) will make a surprising discovery. He’ll spot J.T.’s (Thad Luckinbill) watch, so it’ll probably turn up while the broken pipe’s being repaired. Arturo will decide to fill Rey (Jordi Vilasuso) in on his find. He may have a hunch that it’s important or at least want to get it back to the owner.

Rey will quickly suspect this ties in with J.T.’s disappearance, so he’ll take a trip to Chancellor Park. It won’t be long until Rey makes a shocking move. The Young and the Restless spoilers say he’ll order the soil in the park to be tested. When the results come back, Rey will get evidence that J.T. was buried there.

J.T.’s DNA will be on site, so that’ll be all Rey needs to make this a murder investigation. Next week, November 5-9, Y&R spoilers say Rey will make a startling announcement. He’ll hold a press conference and reveal that J.T. is dead. Rey will vow to track down the person – or people – responsible. He’ll insist that he’s going to find out who killed J.T. and get justice.

Once the ball’s rolling, things will get rough for the cover-up crew. Sharon (Sharon Case), Victoria (Amelia Heinle), Nikki (Melody Thomas Scott) and Phyllis (Gina Tognoni) will all start to sweat. Since Sharon’s working alongside Rey at the police station, she’ll definitely be on edge.

Rey will likely notice Sharon’s growing anxiety and mark it all down in his notes. He’s monitoring Sharon and trying to uncover whatever she’s hiding. After Rey has proof of J.T.’s death, he should have a stronger inkling about what Sharon’s secret is. Rey may hope he can get Sharon rattled enough to prove it, but what about his obvious feelings? Will they get in the way?

The situation will get tricky for the girls’ night gang as well as Rey. Will Sharon crack under the pressure? What will Rey do when he finally finds out the truth? We’ll give you updates as other Young and the Restless news comes in. Stay tuned to Y&R and don’t forget to check CDL often for the latest Young and the Restless spoilers, updates and news.