BY Sean O'Brien on July 30, 2018 | Comments: one comment
Related : Soap Opera, Spoiler, Television, The Young and the Restless 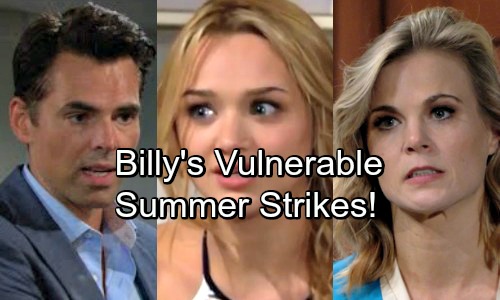 The Young and the Restless spoilers indicate that Summer (Hunter King) wanted to create a split between Phyllis (Gina Tognoni) and her boyfriend. Part I, check. Now, Billy (Jason Thompson) is vulnerable and often doesn’t go too long without a woman.

Summer seemed to be playing the tease game, as she did with Kyle (Michael Mealor) and whoever Pax (an uncast character who was her boyfriend in Atlanta) is. But as the weeks have passed it does seem like she might actually be open to romantically connecting with Billy.

As to Kyle, he’s been led to believe, by Summer, that Syle is back on. He thinks that because King’s character has opened stated they should be together and then made various moves in that direction. What a game player this former Snowflake is!

For his part, Thompson’s character has often shrugged Summer off. He’s not indicated any interest in Phyllis’ daughter, who’s approximately half her and Billy’s age. In fact, Summer’s repeated and annoying attempts to flaunt her body and ease of availability angered Billy on a number of occasions.

Billy resented that Summer would betray her mother in that way and put him in an impossible position. Though the writing staff made Billy believe it was untenable, when all he had to do was tell Phyllis what Summer was doing, she would have come down on her, or at least been aware, and that would have been that, probably.

Y&R opted to revamp King’s character upon her return to the cast. She’d been away for two years after being hired by CBS’ nighttime comedy Life in Pieces. That show is getting a mid-season start, which then allowed King to rejoin the show.

However, CDL fans know that King’s photo has remained on Y&R’s cast page during the time she’s been gone. That speaks to the courtesy offered to this Daytime Emmy Award winner and to modern soap operas’ lesser cast numbers, which are linked to economics.

Of course Phyllis is going to learn what Summer has been doing. The lead-in to that reveal was the mini-reveal that just took place. That involved Phyllis unexpectedly discovering that Billy was gambling. She also learned that Summer knew about it and said nothing.

Just image how Phyllis will react when Silly is exposed. Might that happen when Billy is coerced into giving in, or maybe if Summer sets it up to look that way? Those are two possibilities among many. CDL is a leading source for everything linked to The Young and the Restless. Check back regularly for Y&R spoilers and news!