The Young and the Restless Spoilers: Monday, June 25 – Ashley Insists J.T. Is Back, Points to Eyewitnesses – Jack Grills Dina

BY Heather Hughes on June 21, 2018 | Comments: one comment
Related : Soap Opera, Spoiler, Television, The Young and the Restless 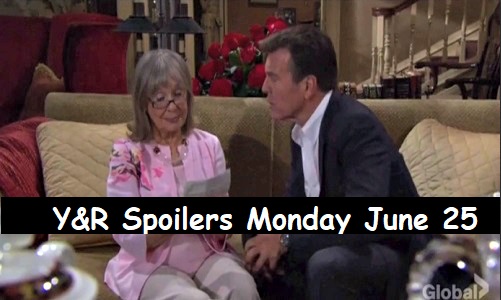 The Young and the Restless (Y&R) spoilers for Monday, June 25, tease that Abby (Melissa Ordway) will want some answers. She recently found a bra at Arturo’s (Jason Canela) place, so she took a little time to mull it over. Now Abby’s ready to hear an explanation. She’ll confront Arturo about her discovery, but she may be surprised by his claims.

It’s possible Arturo had someone over before his reunion with Abby. Things have been complicated and we all know how much Arturo enjoys female company. Then again, Arturo might have a less steamy explanation. There’s been some Y&R buzz about Arturo’s sister potentially coming to town. She might’ve visited him already and left behind her bra.

Perhaps Arturo forgot to mention it or was protecting his sis for some reason. Whatever the case, Abby will get the scoop on that bra soon enough. Elsewhere, Jack’s (Peter Bergman) mission will continue. He needs to know if he’s a Chancellor, so he’ll get Dina’s (Marla Adams) attention and show her Phillip’s (Donnelly Rhodes) picture.

Jack will ask Dina if that man’s his father, but can he trust that she’s lucid enough to answer? Dina apparently had many lovers in her younger years. It would be easy for her to confuse them. On the other hand, Dina may actually have a moment of clarity. Let’s hope she can put Jack a step closer to the truth.

Meanwhile, Billy (Jason Thompson) and Phyllis (Gina Tognoni) will have some sexy time on their balcony. Phyllis will wonder what’ll happen if the neighbors see, but Billy will suggest they should give ‘em a show! These two had better soak up this bliss while they still can. Billy will eventually land in major trouble thanks to Summer (Hunter King).

At some point this week, another J.T. (Thad Luckinbill) bomb will drop. Ashley (Eileen Davidson) will fill Victoria (Amelia Heinle) in on the shocking new info. She’ll note that eyewitnesses spotted a man matching J.T.’s description. Ash will insist that J.T.’s back and could walk through the door any minute now.

Of course, all of this is pretty fishy. The cover-up crew certainly buried someone! The Young and the Restless spoilers previously indicated that J.T. was dead and gone. This whole scenario screams setup, so maybe someone’s trying to rattle Victoria’s cage. It wouldn’t make sense for J.T. to be this sloppy.

Is Victoria being manipulated? Who’s behind the current Newman threat? We’ll give you updates as other Y&R news comes in. Stay tuned to the CBS soap and don’t forget to check CDL often for the latest Young and the Restless spoilers, updates, and news.