BY Heather Hughes on July 29, 2018 | Comments: one comment
Related : Soap Opera, Spoiler, Television, The Young and the Restless 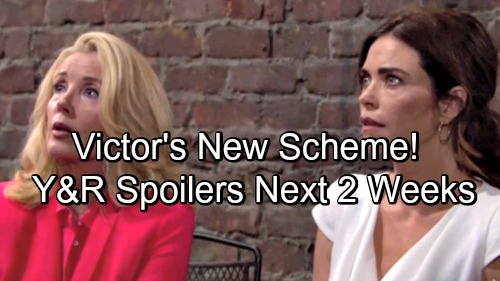 The Young and the Restless (Y&R) spoilers for the next two weeks tease that life will go on in Genoa City. The week of July 30-August 3 will force Hilary’s (Mishael Morgan) loved ones to cope with their grief and move on. Mariah (Camryn Grimes) will do a great job with that task. She’ll take charge at GC Buzz and put together a memorial show that Hilary would be proud of.

Afterward, Tessa (Cait Fairbanks) will ease Mariah’s pain just a bit. She’ll pay her a visit and admit she just couldn’t leave her forever. Once Tessa handles all the Crystal (Morgan Obenreder) drama, she can come back and focus on her relationship with Mariah.

Other Young and the Restless spoilers say Devon (Bryton James) will lose all control. Once Hilary’s emotional funeral wraps up, Devon will snap at Lily (Christel Khalil) for causing the accident. He’ll act like she wanted to take Hilary out on purpose, but Lily will promise it was a horrible mistake.

It looks like the red-light story will come out, so there’s going to be a lot of pain in this family. The Abbots will face their fair share of difficulties as well. The Young and the Restless spoilers state that Billy (Jason Thompson) and Jack (Peter Bergman) will soon be at war. Thanks to Jack’s involvement with Dark Horse, he’s going to cause some problems at Jabot.

Jack’s friendship with Phyllis (Gina Tognoni) should create some conflict as well. Billy may find himself feeling jealous, so Summer (Hunter King) could use that to her advantage. She’ll do some flirting and hope to lure Billy to her bed soon.

Since Summer will face some resistance, she’ll look for something that could push Billy past any hang-ups. If she uncovers the one-night stand secret, that might do the trick. As Summer brings some pressure, Kyle (Michael Mealor) will struggle to keep Phyllis’ bombshell to himself.

Y&R fans can expect Nick to battle temptation later. Will that involve Phyllis? Let’s hope not! Nick doesn’t need any more trouble in his relationship with Sharon (Sharon Case). Over with Paul (Doug Davidson), he’ll suspect that Victor’s (Eric Braeden) up to something. Paul will obviously be right about that. Victor’s always up to something, so that’s an evergreen spoiler.

The week of August 6-10 will deliver more issues for Lily and Devon. The Young and the Restless spoilers say Neil (Kristoff St. John) will have a hard time keeping the peace. Lily will make a bold move in hopes of making amends, but it may not have the desired outcome.

Elsewhere, Summer will get under her mom’s skin. Phyllis will worry that Summer could blow things up with Billy, so she’ll definitely have to stay on guard. Across town, Sharon and Nikki (Melody Thomas Scott) will clash. This may be about the feuding men in their lives, but Victor will propose a truce eventually.

If Victor gives Nick a peace offering, the younger Newman would be wise not to accept it. Victor has made it clear that he can’t be trusted. We’ll give you updates as other Y&R news comes in. Stay tuned to the CBS soap and don’t forget to check CDL often for the latest Young and the Restless spoilers, updates, and news.