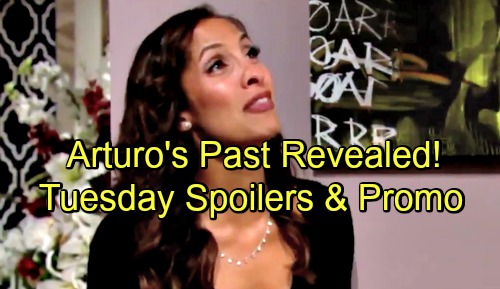 The Young and the Restless (Y&R) spoilers for Tuesday, July 31, tease that Cane (Daniel Goddard) will stay on guard. He’ll realize everyone’s hurting over Hilary’s (Mishael Morgan) demise, so he won’t want to make matters worse. Cane will do everything in his power to protect the big secret. Lily (Christel Khalil) caused the crash by running a red light, but Cane will hope to keep that under wraps.

Of course, that won’t be easy in town like Genoa City! There’s always some snag waiting to trip up secret-keepers. Charlie (Noah Alexander Gerry) and Shauna (Camryn Hamm) also know the truth, so Cane will have to keep them in line. He’ll understand the damage this news would do. Lily’s already struggling to bear the guilt, so this revelation just might break her.

Cane won’t want to strain things between Lily and Devon (Bryton James) either. They’re all dealing with enough sadness right now. Adding anger wouldn’t do any of them any good. Unfortunately, Cane’s efforts won’t work out as well as he hopes. The Young and the Restless spoilers suggest that the truth will come out later this week, so the drama will really explode.

In the meantime, Abby (Melissa Ordway) will try to deepen her relationship with Arturo (Jason Canela). If they want to keep moving forward, they have to know all about each other. Arturo has offered a few details about his family, but Abby will want to learn more. She’ll push Arturo to open up about his past and his loved ones.

This is a great setup for Rey’s (Jordi Vilasuso) arrival in GC. It seems obvious that Rey is Arturo’s brother, so the Rosales fam is expanding on Y&R. The Young and the Restless spoilers say Rey will cause quite a stir down the road. It should be fun to see all the trouble he finds.

Until then, Summer (Hunter King) will get nosy. She’ll turn up the heat and hope she can pry some info out of her ex. Kyle (Michael Mealor) knows Phyllis (Gina Tognoni) slept with someone besides Billy (Jason Thompson). He plans to keep his mouth shut, but Summer can be awfully crafty. Kyle’s going to have a tough fight on his hands.

Will Summer score the juicy shocker she’s seeking? It may take a while, but Y&R fans should have faith in her abilities. Summer’s bound to make a bigger mess eventually! We’ll give you updates as other Y&R details emerge. Stick with the CBS soap and don’t forget to check CDL often for the latest Young and the Restless spoilers, updates, and news.