BY hellodrdavis on July 28, 2018 | Comments: one comment
Related : Soap Opera, Spoiler, Television, The Young and the Restless 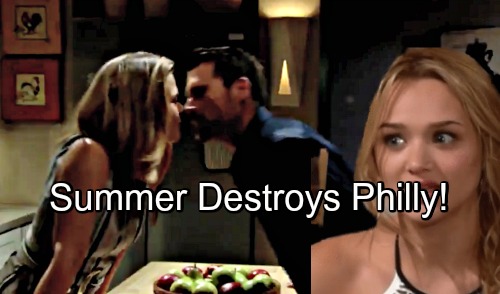 The Young and the Restless spoilers tease that Summer (Hunter King) will be back to her old tricks where Phyllis (Gina Tognoni) and Billy (Jason Thompson) are concerned. Summer seemed to back off a bit after her actions got Billy back into his addictive gambling behavior. It actually seemed like Summer felt remorse when Billy spiraled out of control and Phyllis kicked him out for his lies and deception.

But Y&R spoilers indicate that Summer will soon be back to her manipulative ways, and she’ll focus once again on causing havoc for Philly. She is hell-bent on toying with Philly’s relationship, and this time she’ll go right to work on Billy, who’ll be struggling with his estrangement from Phyllis.

Summer will suggest that Billy find comfort with someone else. Summer will argue that the best way to get over a romantic problem is to have some fun with a new partner.

Will Summer have someone in mind for Billy to have fun with? She’ll offer herself as the other person in this scenario. Summer has come onto Billy before and he has turned her down flat and this time won’t be different, at least not immediately… but the clock is ticking!

He’s not getting along with Phyllis right now and he seems to be in a “throwing caution to the wind” phase. Could we be looking at a Summer/Billy affair?

Summer will also go to work on Phyllis. Y&R spoilers say that Summer will really push her mother’s buttons. Summer likes to remind Phyllis about everything that’s wrong in her relationship with Billy, so maybe she’ll serve up some pointed reminders that Billy wasn’t there for Phyllis during Hilary’s (Mishael Morgan) ordeal. That is going to be a sticking point with Phyllis, and Summer would probably enjoy rubbing it in.

Of course if Summer gets Kyle to spill his secret she will have all the ammo she needs to destroy Philly. The Young and the Restless spoilers indicate that Kyle will in fact taunt Phyllis with his knowledge of her cheating on new Y&R episodes this week, July 30 – August 3.

No matter how Summer plans to meddle in her mother’s relationship with Billy, she’s going to set out to inflict maximum damage. Toying with other people’s lives is sport for Summer. Unfortunately for Philly, Summer’s toying will come at a time when they are at their weakest relationship-wise. Summer might just strike a lethal blow to Philly’s relationship once and for all.

Do you think that Philly can withstand another round of Summer’s games? Stick with the CBS soap and don’t forget to check CDL often for the latest Young and the Restless spoilers, updates, and news.