The Young and the Restless Spoilers: Nick Burned, Pays Price for His Mistakes – Phyllis Cheats with Billy? 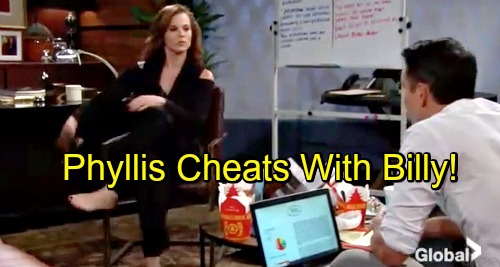 The Young and the Restless (Y&R) spoilers tease that Billy (Jason Thompson) could be setting himself up for trouble. In Friday’s episode, November 30, Kyle (Michael Mealor) questions Billy’s plan. He doesn’t seem to think Billy has much up his sleeve, but Billy argues that everything’s under control. Their plot to take down Phyllis (Gina Tognoni) is still intact. Billy just wants to be smart about how he pulls it off.

Of course, Y&R fans know Phyllis has a weak spot for Billy. She wouldn’t have thrown away her marriage to Jack (Peter Bergman) if she didn’t. Billy knows Phyllis quite well, so it’ll be easy for him to bond with her in the coming weeks. He’s off to a nice start on Friday and things will only improve from there. It turns out Billy and Phyllis make a great team – and not just in the bedroom.

The Young and the Restless spoilers say Phyllis will leave Nick (Joshua Morrow) in the dark on how close they’re getting. She’s been worried about his lingering connection with Sharon (Sharon Case), but maybe Nick’s the one who should be worried! Billy and Phyllis will learn to get along, which could be the first step toward reconciliation.

Phyllis was technically unattached the night she hooked up with Nick, but it still happened almost immediately after her temporary split from Billy. Before that, she carried on a secret affair for months. Phyllis cheated on Jack with his own brother, so betrayals are a way of life for her. Infidelity is her middle name!

In other words, no one will be surprised at all if Phyllis cheats on Nick. Honestly, it’d serve Nick right for betraying Sharon and moving on so quickly. It’s tough to have much sympathy for Nick when he’s been flaunting his new romance all over town. Nick is pretty much using Phyllis anyway. She’s just a Sharon substitute to ease Nick’s broken heart.

As for Billy, his scheme could obviously hit a huge snag. Love may win out and force him to throw Phyllis’ takedown out the window. Kyle wouldn’t be too happy about that, but Billy wouldn’t care. He’s got this magnetic bond with Phyllis, so they may not be able to stay away from each other.

That’s especially true since they’ll be working long hours on special projects. Phyllis and Billy had plenty of office sex when they were together. Will they make love as exes and ultimately rekindle their spark? Could this lead to a “Philly” reunion?