The Young and the Restless Spoilers: Phyllis Fights Back – Punishes Summer For Devious Plot

BY Sean O'Brien on August 26, 2018 | Comments: one comment
Related : Soap Opera, Spoiler, Television, The Young and the Restless 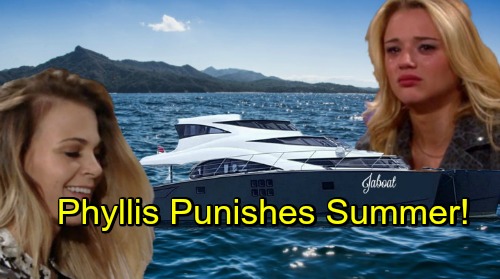 The Young and the Restless spoilers tease that Phyllis (Gina Tognoni), now finally aware of her daughter’s duplicitous behavior, will fiercely fight back. Summer’s (Hunter King) attempts to lure Billy (Jason Thompson) have been revealed, sparking a major mother-daughter conflict in Genoa City.

Phyllis began to suspect that Summer was interested in Billy earlier this month. She discussed the situation with Nick (Joshua Morrow), who rejected the idea out of hand. However, Phyllis’ suspicions were confirmed by an unlikely source.

Kyle (Michael Mealor) is involved in a viscous bet with his one-time and potentially next girlfriend. Summer likes his sports car and Kyle likes, or is at least fronting that he favors a return romance with her. Their amoral deal is disgusting, as will be described a bit later in this digital feature.

Phyllis had a brief sit-down with Kyle at the GC Athletic Club’s rooftop pool, per Kyle’s plea. That’s when she learned of Summer’s plan to fly to Philadelphia, where Billy was scheduled to attend a trade show.

If Summer gets horizontal with Billy she wins Kyle’s sweet ride. If she fails to romantically secure her mother’s boyfriend, who falls in the age-range of her father, than she’s agreed to be Kyle’s so-called significant other again.

Specifically regarding this bet, that Phyllis was unaware of, how does Kyle know that Summer will follow through if she loses? She could easily spurn him and what would he do?

As for Kyle, he’s under no legal, or obviously moral obligation to sign the title of his sports car over to Summer. How could she enforce that part of the deal in victory?

Okay, so, Phyllis quickly returned to Summer’s condo, where Philly will soon be departing. Summer was told of the move just prior to this scene and was attempting to seduce Billy before that happened. All the while she was lying to her mom about traveling to a spa weekend in Madison, Wisconsin.

The brutal confrontation between Phyllis and her Y&R writer’s room transformed daughter included a face-slap and many damaging words. This rift doesn’t seem like it will be easily healed and could surely result in Summer’s exit.

Whether King remains on the show long-term is currently unknown, as she is still part of the cast of Life in Pieces, which will be a mid-season replacement during nighttime television’s rapidly approaching new season.

Hollywoodland is a small world, as King’s sister, Joey King, has joined the cast for that sitcom’s fourth season. So, seeing Summer leave town, due to Hunter’s need to meet her other gig’s contractual obligations and because of her Y&R character’s break with Phyllis would make sense.