The Young and the Restless Spoilers: Phyllis Flicks Billy Off – Jabotique Party Happens With Shocking Fallout

BY Sean O'Brien on November 13, 2018 | Comments: one comment
Related : Soap Opera, Spoiler, Television, The Young and the Restless 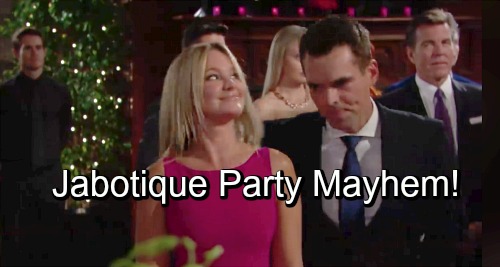 The Young and the Restless spoilers tease that Phyllis’ (Gina Tognoni) near-instant rebound to Nick (Joshua Morrow) is already paying business dividends. A sore need for cash was met by Dark Horse’s agreement to sponsor the Jabotique launch party. Of course, this soapy bash merely sets the stage for the main drama, being the faceoff between the former Philly and the reconciling Phack.

Little grass grows under Phyllis’ feet, now does it? With Philly (the racehorse Billy bought as a gift for his now-disposed loved one) sent out to pasture, Tognoni’s emboldened character has chosen to bet on a different stallion, which has long been her pattern and is also true of Nick.

Dark Horse is more than the name of Nick’s new company. It represents a statement attitude. Seeming unlikely to succeed, those who are underestimated in Genoa City may have an easier path to success simply due to perception.

Just as no one expected Nick to take Victor (Eric Braeden) head on, so too was the head-spinning reboot of Phack not seen until this former taboo pairing impulsed into a night of passion a handful of months ago. Phyllis and Nick unapologetically ripped open that old door the instant they gave into whatever true feelings have persisted for all these years.

Now, as to Billy (Jason Thompson). His name first appears far down the digital screen to further affirm just how far he’s fallen in Phyllis’ eyes. It’s not that her feelings for Jack’s (Peter Bergman) brother evaporated the moment Philly (meaning the couple and not the filly in this instance) split. Instead, she was devastated, but has rapidly bounced back.

The easiest and seeming projected way Phyllis was going to get over Billy was going to involve reconciling with Jack, right? That had to be why viewers were shown various scenes with Tognoni and Bergman’s characters growing closer in recent months. But no, it was just a well-plotted head-fake. With all kudos being offered, this twist is arguably one of the stronger script turnabouts in years.

Billy hasn’t moved onto someone else, though his bond with Sharon (Sharon Case) may be telling. For now, both scorned souls simply want to get Phyllis’ and Nick’s goats. There’s a problem with that, being that Phack is actually into each other for real. So intended jealous reactions will likely only scratch surface-level.

Thompson’s character won’t like seeing Phyllis take credit for the Jabotique idea that he invented. Along with that Nick, the man who wrecked Philly’s future, is at Phyllis’ side and is a financial backer at the launch party. Any recent ex- would be triggered by that twofer.

Phack is already back. Whether Shilly’s potential accelerates, due to Billy’s interest and Mia’s (Noemi Gonzalez) seeming block of Sharon with Rey (Jordi Vilasuso), helps to create a portion of Y&R’s backdrop this week.