The Young and the Restless Spoilers: Phyllis Insanely Jealous Over Villy Reunion – Coverup Crew Turn On Each Other 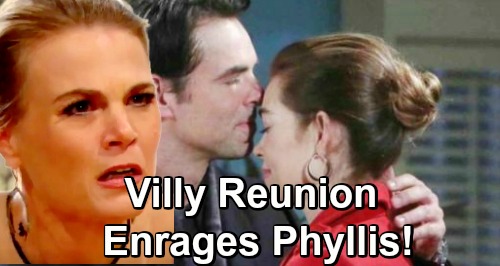 For the moment, Phyllis, Victoria, Nikki (Melody Thomas Scott), and Sharon (Sharon Case) are okay. The Fearsome Foursome aren’t totally safe, but they’ve managed to stay out of jail and that’s something.

Tessa (Cait Fairbanks) appears to be neutralized. Unless Miss Porter is revealed as their sole antagonist, Phyllis, Vickie, and the others have a chance to make it through the holidays. Yes, Nikki will be fighting for her life. But at least she’ll be doing that at Genoa City Memorial Hospital, instead of at Lakewood Prison’s medical facility.

The Nikki wink was offered to link Vickie’s need for a shoulder to cry on. And that’s where Billy comes in. He’s the guy who was told by Phyllis that Philly was done. As in over, finished, with no more lovin’.

Billy took Phyllis seriously and is prepared to move on. He’s never stopped loving Victoria. She’s his first choice and has been since she found him in the gutter when he looked like Billy Miller.

All reasonable minds naturally see the re-couple forming between Victoria and Billy, considering the latest Newman family scare, the ongoing coverup crew drama that’s weighing on Vickie’s mind, and the Christmas seasonal air. Reasonable is the key word within the last sentence.

Despite the fact that she knew he was open to a Philly reboot and that she’s moved into what should have been the Shick house, Tognoni’s character is now primed to pull, well, a Phyllis. Loose lips sink ships and so too can Miss Summer’s supercharged banter with Vickie when the wrong ears, meaning Mia’s (Noemi Gonzalez), are near.

The setup to Mia overhearing crucial information was established with Nikki’s visit to the mobile beauty businesses home base, which is located in the invented apartment above Crimson Lights. Desperate to prove herself to Rey (Jordi Vilasuso), Mia is primed to relay J.T. (Thad Luckinbill) case related information.

Alternatively, Y&R could opt to have Rey gain the knowledge directly, if scripts are moving more quickly to a dramatic pull of one, or more coverup crew members into GC’s jailhouse.

Phyllis didn’t like Sharon’s recent pop-in at Nick’s (Joshua Morrow). She also knows that Case’s character is like Victoria. Meaning that the current man Phyllis is with also has his heart owned by another woman.

Loop the Victoria trigger to Sharon, consider Phyllis’ already stated desire to look out for herself, and the coverup crew’s cover could easily be ripped off. CDL is a leading source for everything linked to The Young and the Restless. Check back regularly for Y&R spoilers and news!