The Young and the Restless Spoilers: Phyllis Left Heartbroken by Nick – Does She Deserve It or Has She Been Punished Enough?

BY Heather Hughes on November 20, 2018 | Comments: one comment
Related : Soap Opera, Spoiler, Television, The Young and the Restless 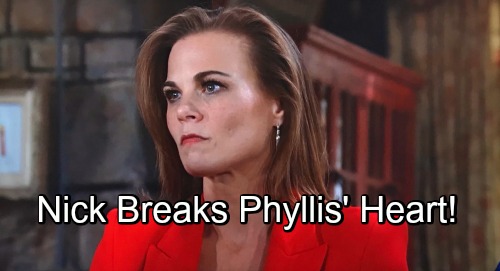 The Young and the Restless (Y&R) spoilers tease that Phyllis (Gina Tognoni) may be setting herself up for more heartbreak. Y&R fans know she’s a tough cookie, but she’s only human. Phyllis isn’t completely over Billy (Jason Thompson) yet, but that doesn’t mean she isn’t falling for Nick (Joshua Morrow). It’s possible to still love someone while feelings grow for someone else.

As for Nick, he’s obviously using Phyllis as a stand-in for Sharon (Sharon Case). She supports his ambitious and somewhat dark side, so that’s a bonus. However, this really seems to be about filling the void. Why else would Nick push Phyllis to move in with him so soon?

There’s no need to rush this, but Nick’s ready to move full-speed ahead anyway. It appears he’s so consumed by his loss that he’s trying to push Phyllis into the Sharon mold. That’s not a great way to start off a relationship. For proof that Nick’s stuck on Sharon, consider his recent fantasy. As Nick reflected on his dance with Phyllis, he briefly imagined Sharon in her place.

The Young and the Restless spoilers say Phyllis will try to keep her guard up and protect her heart, but that plan may not work. She’s vulnerable right now, so Nick may sweep her right off her feet. This may become more for Phyllis than it is for Nick, which could bring some devastation.

Of course, we’re not saying Nick and Sharon will get back together anytime soon. Never say never on a “Shick” reunion, but that seems like something that would only happen months or even years down the road. Y&R’s clearly going for a slow-burn Rey (Jordi Vilasuso) and Sharon romance right now.

Still, Nick and Phyllis’ connection may not go as deep as she wants. He could lose interest and drift away or just stop kidding himself. Phyllis just can’t replace Sharon in Nick’s heart. Between this and all the looming J.T. (Thad Luckinbill) drama, Phyllis should suffer a great deal.

Does Phyllis deserve it or has she been punished enough? It was a low blow for Billy (Jason Thompson) to sleep with Summer (Hunter King), so we have some sympathy over that. However, it was pretty sleazy of Phyllis to sleep with Nick a couple days into her Billy break.

Phyllis also jumped right back in the sack with Nick right after he gave up on Sharon. Mariah (Camryn Grimes) once called Phyllis a “sex-crazed barracuda” and that seems entirely appropriate. Phyllis is now flaunting her new relationship with Nick, so some might say she deserves whatever she has coming.