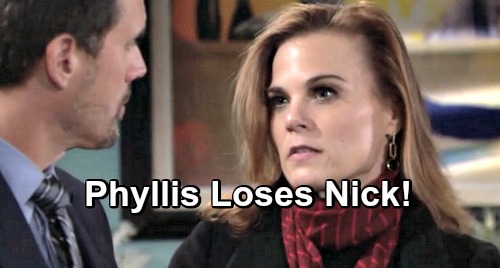 The Young and the Restless spoilers tease that Phyllis (Gina Tognoni) jeopardized her relationship with Nick (Joshua Morrow) before it even reignited. Her self-appointed role as the coverup crew’s fixer last spring was recently followed by Phyllis casting shade on Victor (Eric Braeden) as J.T.’s (Thad Luckinbill) killer.

Vickie (Amelia Heinle) was enraged that Phyllis suggested the Moustache should be considered as a suspect. J.T.’s almost widow felt it was outrageous that the revived Red hopes the authorities continue to pursue Victor as the target of their investigation.

Phyllis knows that Victor didn’t kill J.T., but in her mind that should ensure he’ll never be found guilty, or convicted. In effect, his troubles would be washed away because the coverup crew’s actions make it impossible for Victor to be at fault, which is a complete me-first approach. But, this is Phyllis.

Like his sister, Nick will also be angered by the intent of Phyllis’ assertion. While he knows nothing about what really happened to J.T., Morrow’s character will soon become enlightened. Trust will be broken at that point in the plot and the recently revived Phick will likely be badly damaged, if not eviscerated.

Y&R recast the Phyllis role in 2014, moving from the original, iconic Michelle Stafford to fellow daytime veteran, Tognoni. The swap out has proved swell, as Tognoni’s softer, often times more light-hearted edition of Phyllis allows a different take on this classic character to be presented. However, Phyllis’ fool-around with Billy (as initially played by Burgess Jenkins, when Philly first began forming at the end of 2015) did remind tenured viewers who Miss Summers once was, meaning a full firebrand.

Nick opted to rekindle a personal relationship with Phyllis last summer because of the bad girl element that still exists within her personality. In turn she elicits the bad boy in him. Nick being the man who took J.T.’s identity, which is a possible nugget Phick fans can chew on in hopes that their favorite couple survives.

At some point all will come out regarding J.T., be he dead, alive, or somewhere in between. Along with that climactic moment, Nick will realize that Phyllis has been withholding a critical truth from him.

With no love lost for Victor, Nick’s beef won’t be the false suspicion Victor faced, but instead the double-life Phyllis has been leading. Is that the type of influence Nick wants around Christian (Jude and Ozzy McGuigen)? No, his first choice was and remains Sharon (Sharon Case), another coverup crew member, if, she’ll take him back.