The Young and the Restless Spoilers: Philly Explosion and Paternity Drama Give Phack Another Chance – Phyllis Pulled Back Toward Jack 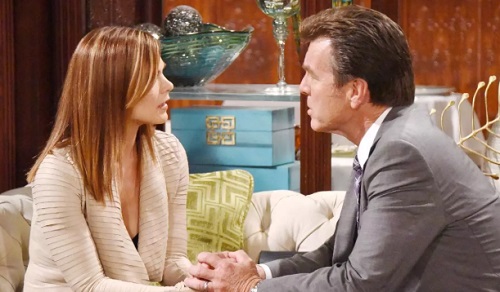 The Young and the Restless (Y&R) spoilers tease that Billy (Jason Thompson) and Phyllis (Gina Tognoni) are headed for trouble. They’ve got a couple of big problems brewing between them, so it’s only a matter of time until their relationship falls apart. For starters, there’s Billy’s gambling addiction. He claims he’s got it under control, but isn’t that what many addicts claim?

Phyllis knows this is important to Billy’s, so she’s trying to be supportive. She already tried to stand against Billy’s gambling, but that only caused strife. Phyllis certainly doesn’t want to rock the boat again. Instead, Phyllis is probably just hoping Billy will get this out of his system and move on. She doesn’t know that Kyle’s (Michael Mealor) setting Billy up to fail.

Billy seems poised to lose a lot of money and have his dreams crushed. He’s been enjoying his role as Jabot’s CEO, but that’s mostly because it comes with so much risk-taking. Billy truly loves the thrill of taking an uncertain situation and turning it into a huge success. Sadly, risky business decisions can often end in failure. That’s why Ashley’s (Eileen Davidson) been so fired up about getting Billy off the throne.

The Young and the Restless spoilers say Billy’s gambling will continue to be an issue. It’ll lead to serious tension between Billy and Ashley, so be prepared for more family drama. Phyllis may stand by Billy through this crisis, but will he stand by her when major secrets are revealed? Y&R fans can’t forget that Phyllis is keeping two bombshells under wraps.

The first one is the fact that she participated in the cover-up of J.T.’s (Thad Luckinbill) death. Of course, that secret’s not so bad compared to the hookup with Nick (Joshua Morrow) shocker. That one involves a much deeper betrayal. Phyllis and Billy were technically on a break at the time, but he won’t see it that way. Billy’s bound to be hurt and furious, so “Philly” could really blow up.

If that leads Billy into Summer’s (Hunter King) bed, that could seal Phyllis and Billy’s fate. The Young and the Restless could have new paths in mind for these characters – at least for a while. Since Jack (Peter Bergman) still has feelings for Phyllis, the show may inch them back in each other’s direction. After all, Jack will need support thanks to some looming paternity revelations.

Y&R spoilers say Victor (Eric Braeden) will believe he might be Jack’s half-brother. He’ll try to hide it, but Jack will inevitably find out anyway. When Jack discovers he may share a father with Victor, his world will explode. It’d be an excellent opportunity for Jack to lean on Phyllis. They could grow closer as they work through everything they’re dealing with.

Are you on board with a Jack and Phyllis reunion? Who should Billy be paired with next? Should he have a fling with Summer and look elsewhere for love? We’ll give you updates as other Y&R news comes in. Stay tuned to the CBS soap and don’t forget to check CDL often for the latest Young and the Restless spoilers, updates and news.