BY Marcy Cohen on May 16, 2018 | Comments: one comment
Related : Soap Opera, Spoiler, Television, The Young and the Restless 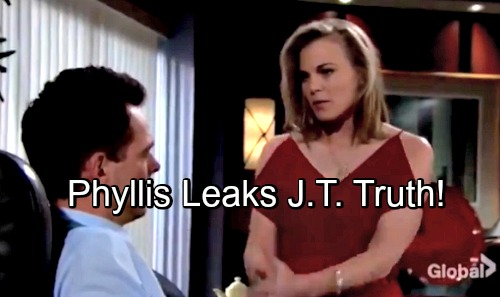 The Young and the Restless (Y&R) spoilers tease that a huge secret’s on the verge of getting out. Y&R fans know the drill. Whenever someone’s hiding something on the CBS soap, the news tends to spread. A secret is never publicly exposed without a character or two being brought in the loop.

Since there are four major players in the J.T. (Thad Luckinbill) cover-up, that drastically boosts the chances of spillage. We’ve got some very nervous ladies, so somebody’s bound to crack sooner or later. Nikki (Melody Thomas Scott) struck the blow, which has led to plenty of guilt. She never intended for J.T. to die and she feels responsible for the mess everyone’s dealing with.

Victoria’s (Amelia Heinle) nearly confessed to the cops more than once, so she’s a threat as well. She even gives Paul (Doug Davidson) an inaccurate version of events on Thursday. That’s a clear sign that she’s getting desperate and making things worse.

Sharon (Sharon Case) claims she’s understands what she has to do now, but she’s not known for her stability. As Nick’s (Joshua Morrow) investigation continues, Sharon will face more and more pressure. That could convince Sharon to blurt out the truth at some point.

However, The Young and the Restless spoilers say a twist is coming before the month is over. Someone will indeed blab, but it may not be the person you’d suspect. Y&R will deliver a May sweeps bombshell and it just might involve Phyllis (Gina Tognoni) being the surprise spiller.

Phyllis has been running the show from the get-go. She’s the one who insisted nobody would buy the truth. Phyllis has also been careful to keep the other women in line. As the cover-up crew’s ringleader, Phyllis hasn’t shown any signs of nearing her breaking point.

That’s why Phyllis is the perfect candidate to share this secret. No one would be taken aback if any of the others came clean. Phyllis is the only person who can lead to a stunning scenario. It sounds like she may be the first to tell the real story.

If that’s the case, who will Phyllis blab to? Again, Y&R secrets usually trickle out before they become public knowledge. Instead of coming clean to someone like Paul, Phyllis might confide in Billy (Jason Thompson). Perhaps he’ll find some evidence or catch Phyllis in an unexpected lie. Billy might back Phyllis into a corner and force a confession out of her.

Naturally, Billy would want to protect his girlfriend as well as the mother of his kids. Phyllis and Victoria might even be grateful to have Billy on their side. Maybe he could help handle Nick. Nikki and Sharon would just have to deal with this development and trust that their secret would remain safe.