BY Heather Hughes on November 1, 2018 | Comments: one comment
Related : Soap Opera, Spoiler, Television, The Young and the Restless 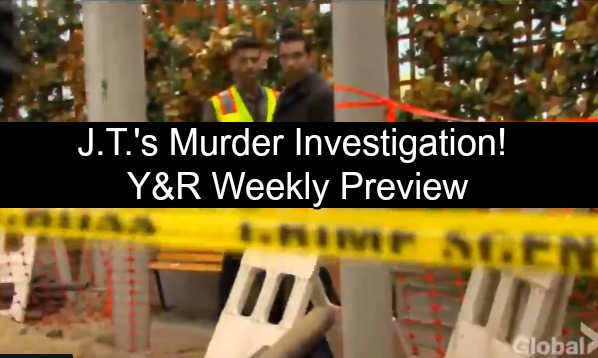 The Young and the Restless (Y&R) spoilers for the week of November 5-9 tease that some stunning developments are on the way. For starters, Nick (Joshua Morrow) will take a step toward moving on. Like Summer (Hunter King) once said, the best way to get over someone is to get under somebody else. At least that’s true on soaps!

Nick will distract himself from Sharon (Sharon Case) with a familiar hookup partner. When Phyllis (Gina Tognoni) drops by Dark Horse, it won’t be long until passion reignites. The Young and the Restless spoilers say they’ll share a steamy kiss. Nick and Phyllis just won’t be able to control their desires, so their smooch will lead to office sex.

Once the deed is done, these exes will establish that they’re not looking for anything serious. Neither one of them will want a new relationship right now, so they’ll choose to keep it casual. In other words, Phyllis and Nick will plan to be friends with benefits. That arrangement doesn’t usually work out on daytime dramas, so deeper feelings may emerge down the road.

In the meantime, Victoria (Amelia Heinle) will fear J.T.’s (Thad Luckinbill) wrath. Since the corpse is missing in Friday’s episode, questions will remain for the cover-up crew. Is J.T. alive and out to get them? Did somebody come along and move the body before they got there? If so, what do they intend to do with it? Victoria will ponder all of these options, but J.T.’s survival will bring her the most worries.

During a chat with Sharon, Victoria will ask what she thinks. She’ll keep telling herself that it’s too farfetched, but she just won’t be able to let it go. Sharon might point out that J.T.’s been out of the picture a long time. Why would he wait until now to strike? We can’t forget that Nick’s impersonation plot was just that – a plot. J.T. was never back in Genoa City and hasn’t been seen since the spring.

Instead, someone like Victor (Eric Braeden) might’ve moved the body for protection. Too bad a piece of evidence was left behind! Arturo (Jason Canela) will stumble across a watch in Chancellor Park. The inscription on the back will say, “Love Mac.” After Arturo hands the watch over to Rey (Jordi Vilasuso), he’ll quickly determined that this belonged to J.T.

Next, Rey will close off the area and put police tape up to indicate a crime scene. Y&R spoilers say Rey will pursue this lead thoroughly. The soil will test positive for J.T.’s DNA, so Rey will hold a press conference. He’ll announce that this has gone from a missing person investigation to one for murder!