The Young and the Restless Spoilers: Reed Rages Over Prime Suspect Victor – Wants Revenge on Grandpa for J.T.’s Murder

BY Heather Hughes on December 6, 2018 | Comments: one comment
Related : Soap Opera, Spoiler, Television, The Young and the Restless 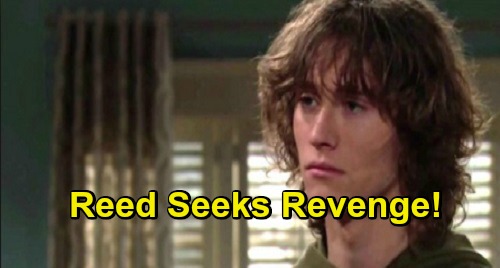 The Young and the Restless (Y&R) spoilers tease that Reed (Tristan Lake Leabu) will come home for the holidays, but he won’t exactly be merry and bright! Instead, Reed will be bitter from all his unanswered questions about J.T. (Thad Luckinbill). He’ll be determined to get to the bottom of this father’s disappearance.

Angry Reed will head back to Genoa City starting Tuesday, December 11. Note the airdate change! Reed was supposed to come a day earlier, but a recent preemption pushed that to Tuesday. Luckily, Reed’s return will be worth the wait. The Young and the Restless spoilers say Reed’s presence alone will leave Victoria (Amelia Heinle) on edge.

It’s one thing to lie to your kid about his dead dad over the phone. It’s quite another to look in your son’s devastated eyes and tell that same lie. Victoria will see that Reed is in a lot of pain, so it’ll break her heart that she’s part of that sorrow. She could provide the answers Reed needs, but she wouldn’t dare tell the truth about J.T.’s stunning demise.

Y&R fans can expect Reed to have mixed feelings about the investigation. He’ll insist that if J.T. is indeed deceased, someone needs to pay. However, the news about the missing body will also fill Reed with hope. He’ll wonder if J.T. could really still be out there somewhere – and on a soap, nobody can rule that out.

The Young and the Restless spoilers say Victoria will approach both sides of this carefully. She won’t want to feed that false hope, but she won’t want Reed looking for vengeance either. Those options certainly won’t do the cover-up crew any favors. Victoria will have a heart-to-heart with Reed and settle him down a bit, so she’ll soon feel better about the situation.

Unfortunately, Reed will just be putting on a show for his mom’s sake. When he talks to Billy (Jason Thompson) later, Reed will admit that he’s still craving revenge. Based on the comments Reed makes, it’ll be easy for Billy to sense trouble. He’ll decide to pass along a warning to Victoria, who’ll panic all over again.

That’s because the biggest shocker is still to come for Reed. When he finds out his own grandfather is the prime suspect, Reed is bound to blow his top! Victor (Eric Braeden) had a fierce feud going with J.T. before Reed left, so it shouldn’t be tough for the teen to believe the bogus evidence.