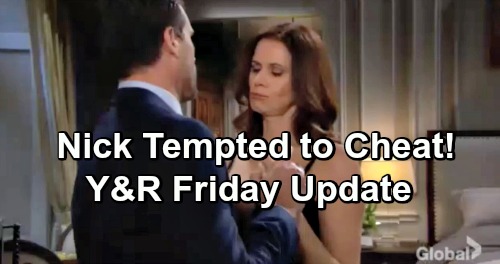 The Young and the Restless (Y&R) spoilers update and recap for Friday, December 7, tease that Rey (Jordi Vilasuso) will rev up the pressure. He’ll question Victoria (Amelia Heinle) and Nikki (Melody Thomas Scott) about Victor’s (Eric Braeden) sudden vanishing act. Of course, the Newman women will stay strong. They know Victor’s innocent, so they’ll maintain that he had absolutely nothing to do with this murder case.

Rey will suspect there’s more to the story, but he’ll have to let Victoria and Nikki go for now. They’ll head back at Victoria’s house, where Nikki will face temptation. She’ll grab some alcohol and pour herself a glass, but Victoria’s return will derail her guzzling. Nikki will empty the glass into a flowerpot to cover her near slipup.

Moments later, Sharon (Sharon Case) will walk in and hear all about Rey’s new discoveries. She’ll suggest Victor (Eric Braeden) might’ve come along after them and killed J.T. Sharon will contend that maybe J.T. was dead after all. Victoria and Nikki won’t buy that Victor’s to blame, so they’ll shift gears and focus on Jack (Peter Bergman). He’s Victor’s enemy, they’ll at least have to consider the option.

Sharon will eventually pipe up that Phyllis must be responsible. She’ll bring up Phyllis’ complicated history with Victor and how she would’ve wanted to bring him down. Nikki and Victoria will explain why it’s too farfetched. That’s when Nikki will decide there’s only one other person she can think of. Victoria will get the picture and declare that they have to end this.

At Mariah (Camryn Grimes) and Tessa’s (Cait Fairbanks) place, they’ll take jabs at each other over their secrets. Mariah will suggest that this isn’t helping, so Tessa will wonder what will. Mariah will admit she’s still trying to figure that out. She’ll meet with Kyle (Michael Mealor) later and confess that she’s terrified of dumping Tessa. Mariah won’t know if she’ll ever meet someone else who will love her.

Kyle will give Mariah a pep talk and argue that being afraid isn’t a good enough reason to stay. She’ll decide to break things off in person at Crimson Lights. Once Tessa is summoned, she’ll confirm that she’s coming via text. Unfortunately, Tessa won’t make the meeting. She’ll be kidnapped by unseen Victoria and the others as she leaves the apartment.

Tessa’s keys will hit the floor as a black bag is draped over her head. She’s in for a rough time thanks to the cover-up crew! Speaking of rough times, Devon (Bryton James) will continue to struggle. His panic attack will leave him spiraling, but Ana (Loren Lott) will talk Devon into taking his new prescription. Ana will also set up a video chat with Renee to seal the Rebekah Barlow deal.

Devon will be grateful that Ana pitched in when he needed her. He’ll also be glad Ana isn’t giving up on him. Across town, Nick (Joshua Morrow) will carry out Phyllis’ (Gina Tognoni) plan. He’ll go on a fake date with Rebekah and hope to get some contracts signed.

The Young and the Restless spoilers say Billy (Jason Thompson) will spot the rendezvous and assume Nick is cheating. He’ll blab to Phyllis, who will chuckle about the confusion. Phyllis will clarify that Nick is actually on their side. She’ll end up sharing her regrets with Billy and he’ll share a few of his own.

When Phyllis asks if Billy is seeking another chance, he’ll wonder if she’s looking to give him one. They’ll share an intense moment, but they’ll ultimately agree that Billy should leave. Over with Nick, Rebekah will lure him to her suite to sign the paperwork. Y&R fans can expect some awkwardness once Rebekah appears in sexy lingerie.

Nick will try to turn Rebekah’s attention back to business, but she’ll be adamant that it can wait. Will Nick be forced to blow the deal? Phyllis would probably prefer that over Nick hopping in bed with Rebekah! We’ll give you updates as other Young and the Restless news comes in. Stick with Y&R and don’t forget to check CDL often for the latest Young and the Restless spoilers, updates and news.