The Young and the Restless Spoilers: Victor Framed Himself For J.T.’s Murder to Protect Nikki and Victoria – Scheme Dupes Rey?

BY Heather Hughes on December 6, 2018 | Comments: one comment
Related : Soap Opera, Spoiler, Television, The Young and the Restless 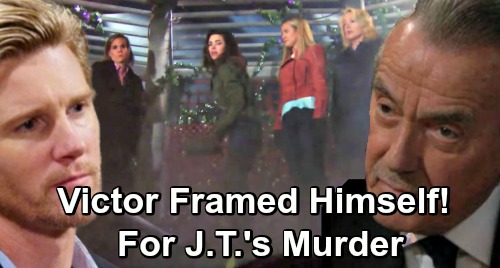 The Young and the Restless (Y&R) spoilers tease that the cover-up crew will grow increasingly desperate for answers. Things are really falling apart for this secret circle. Victoria (Amelia Heinle), Phyllis (Gina Tognoni), Nikki (Melody Thomas Scott) and Sharon (Sharon Case) all have so much at stake.

However, the latest threat seems to relate specifically to the Newman clan. As a result, Nikki and Victoria will remain the most rattled. The stables were set on fire and the firearm registered to Victor (Eric Braeden) was found with only his fingerprints on it. J.T.’s (Thad Luckinbill) bloody shirt was added to the mix, which made Victor (Eric Braeden) the prime suspect in this murder investigation.

Who’s setting up Victor up and way? The obvious answer would be someone who wants revenge, but soaps don’t always go for the obvious answer. Y&R fans will recall how Nick’s (Joshua Morrow) impersonation plot fooled everyone in Genoa City. The Young and the Restless was willing to let Nick wear a J.T. mask and terrorize his abused sister, so anything goes!

Sharon went off on Nick for pretending to be J.T. and causing chaos, but he defended himself. Nick had to take a page out of Victor’s playbook for the sake of the custody situation. Raising Christian (Jude and Ozzy McGuigen) was too important, so Nick did what he had to do. Perhaps the show will take a similar route with Victor.

What if Victor is behind his own framing? If he knows what Nikki and the others did, he may be falling on his sword to protect them. The evidence is circumstantial, so Victor may feel confident that he can get off the hook. If he is responsible for this setup, that probably means Victor moved the body, too. That could be his insurance policy since Rey (Jordi Vilasuso) can’t prove cause of death without it.

Victor has suddenly vanished, so there may be some complications he didn’t anticipate. Going off the grid could be part of Victor’s plan, but there’s also a chance that an enemy is fighting back at the worst possible time. The Young and the Restless spoilers say Nikki will find herself in the hospital after an attack, so Victor wouldn’t be behind that part. He wouldn’t go as far as to have his wife injured.

Victor’s scheme may go awry like many of the ones before it. His foolproof plans aren’t usually as foolproof as he thinks! Victor could inadvertently stir the pot and provoke a mysterious foe’s wrath. A miraculously alive J.T. would be a great option here.

Still, Victor would have good intentions with this potential setup. He’d do anything for his family, even if it means scaring them for a better outcome. Nikki and Victoria are outraged that Victor’s being framed, but it could actually be Victor trying to help them out!