The Young and the Restless Spoilers: Ruthless Kidnappers Dump Tessa in the Woods, Mariah Freaks – See Who’s Behind Shocking Plot 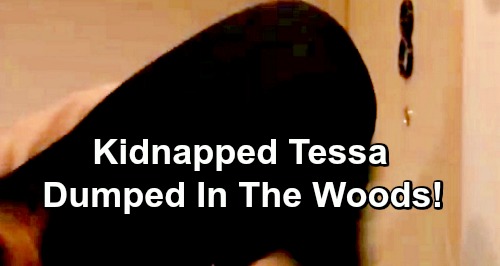 The Young and the Restless (Y&R) spoilers tease that Tessa (Cait Fairbanks) will be on her way to meet Mariah (Camryn Grimes) when she faces total terror. She’ll scream as someone covers her head with a black cloak and grabs her from behind. Tessa will be startled enough to drop her keys, so they should be waiting for Mariah to discover.

When Tessa is a no-show for their meeting at Crimson Lights, Mariah may decide to look for her at home. She could find herself in a panic thanks to the lost keys and unanswered phone calls. Mariah is all set to break up with Tessa in Friday’s episode, but that plan will be put on hold – or maybe even ditched entirely.

Regardless, Mariah’s main goal will be finding Tessa and saving her from whatever trouble she’s in. That’ll inevitably be her priority on Monday. Unfortunately, Mariah doesn’t realize her own mother is partially responsible! Sharon (Sharon Case), Victoria (Amelia Heinle) and Nikki (Melody Thomas Scott) are the orchestrators of this cruel plot. They’ll want to scare Tessa into giving them the info they want.

Y&R fans know Tessa blackmailed the cover-up crew, but she had a good reason. Some violent goons smuggled Crystal (Morgan Obenreder) into Canada and demanded $20,000 afterward. Tessa worked her butt off to pay in installments, but that wasn’t enough. The thugs just kept revving up the pressure. They were even following Mariah and harassing her with breathy phone calls.

Of course, Tessa also had the life crushed out of her at Crimson Lights, which left Sharon concerned about her awful bruises. Sharon witnessed how shaken up Tessa was after that attack. For her to be part of scaring Tessa with a kidnapping is downright ruthless! You can bet Mariah will think so, too.

Before Mariah’s brought in the loop, the girls’ night gang will demand some answers. Victoria, Sharon and Nikki will want Tessa flustered enough to spill the truth. They’ll reduce her to tears with all their badgering and fierce threats.

Naturally, this abduction will be a giant waste of time. Tessa had nothing to do with the blaze at the Newman stables or the planted evidence against Victor (Eric Braeden). She’ll be completely in the dark on the firearm and J.T.’s (Thad Luckinbill) blood-splashed shirt.

The cover-up crew will get confirmation that Mariah was the only person Tessa told. Tessa may point out that she would never rat out Mariah’s mom. Sharon obviously won’t be Tessa’s favorite person after this kidnapping drama, but her promise will remain intact.

Once Victoria and the others are satisfied, they’ll leave Tessa out in the woods to find her own way home. It seems that’ll either be another scare tactic or just another little form of payback. The Young and the Restless spoilers say Mariah will ultimately find Tessa and learn what went down. She’ll blow her top when she realizes Sharon and the others have once again betrayed her trust.