The Young and the Restless Spoilers: Reed Runs Down Drunk Nikki In Hit-and-Run Crash – Grandma Struggles To Survive

BY Heather Hughes on December 13, 2018 | Comments: one comment
Related : Soap Opera, Spoiler, Television, The Young and the Restless 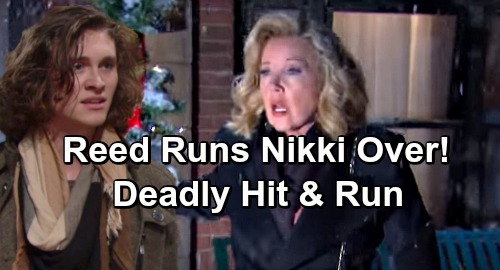 The Young and the Restless (Y&R) spoilers tease that Nikki’s (Melody Thomas Scott) battle with the bottle will take a devastating turn. She’s been sneaking drinks lately and that can only lead to trouble. The stress is becoming too much for Nikki, so she’ll chug more alcohol and put herself on a path to a life-threatening situation.

Meanwhile, Reed (Tristan Lake Leabu) will go out for a joyride with Charlie (Noah Alexander Gerry). Cane (Daniel Goddard) has some reservations about letting Reed hang out with Mattie (Lexie Stevenson) and Charlie’s had his fair share of issues with Reed, too. However, it looks like the tension will lift somewhat on next week’s Y&R episodes, December 17-21. Victoria’s (Amelia Heinle) chat with Cane should have something to do with that.

Y&R spoilers say Reed will be at the wheel of Charlie’s car when disaster strikes. That brings us to drunk Nikki. She’ll stumble around in the snow thanks to all the alcohol she’s consumed. It won’t be long until Nikki staggers into oncoming traffic and freezes. Nikki will look up just in time to see headlights speeding right at her.

Grandma won’t be getting run over by a reindeer this Christmas; she’ll get run over by her own grandson instead! The worst part is that Reed and Charlie won’t even realize what’s happened. They’ll think they simply hit a trash can, so The Young and the Restless spoilers say they’ll just keep right on driving.

Nikki’s made some awfully trashy moves lately – like terrorizing Tessa (Cait Fairbanks) with Victoria (Amelia Heinle) and leaving her in the cold woods. Maybe the trash can confusion is appropriate. Nikki did suggest that what goes around comes around, so this could be her dose of soapy karma.

Of course, The Young and the Restless fans will certainly have some sympathy for Nikki and the fight she’s about to face. Nikki will be left badly injured on the side of the road. This hit-and-run accident will definitely send shockwaves through Genoa City. The Newman clan will be left reeling as Nikki struggles to survive.

Once Reed hears the news about his hospitalized grandmother, he should put it all together. How long will it take Reed to come clean about his involvement? We’ll give you updates as other Y&R details emerge. Stay tuned to the CBS soap and don’t forget to check CDL often for the latest Young and the Restless spoilers, updates and news.