The Young and the Restless Spoilers: Reed’s Return Spells Disaster for Cover-up Crew

BY Marcy Cohen on November 28, 2018 | Comments: one comment
Related : Soap Opera, Spoiler, Television, The Young and the Restless 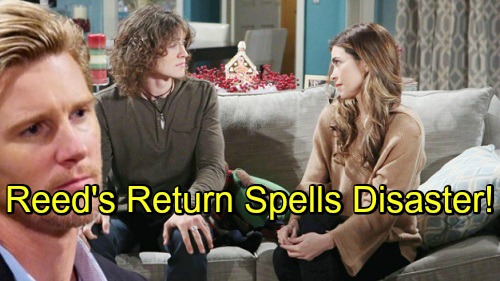 The Young and the Restless (Y&R) spoilers tease that the cover-up posse will struggle to keep their plan intact. Tessa (Cait Fairbanks) already threw them for a loop with her blackmail, but that threat seems to be handled for now. Alas, it’s just a matter of time until another threat hits. The next one could bring some infighting and heat up the high-stakes drama.

Y&R fans can expect Reed (Tristan Lake Leabu) to return home soon. He’ll be making his way back to Genoa City on December 10. Victoria got in touch with Reed after the GCPC ruled this a murder investigation, but the teen decided to stay at music boarding school. However, Reed won’t be able to stay away much longer. Both the holidays and a need for answers will force Reed home.

The Young and the Restless spoilers say Reed will become a real pest for the girls’ night gang. Of course, no one can blame him for being curious about his own father’s demise. Reed’s going to have questions, but Victoria (Amelia Heinle) won’t want to answer them. She’ll dance around the truth and flat-out lie when she has to.

Victoria certainly won’t want her son to know she was involved in J.T.’s (Thad Luckinbill) death and the cover-up that followed. Nevertheless, guilt could hit hard for Victoria eventually. The same goes for Nikki (Melody Thomas Scott), Reed’s grandmother. She’s given Reed good advice in the past, so it’s easy to imagine him leaning on her for support again.

What’ll happen if Reed breaks down over losing his dad? Could Nikki find herself on the verge of cracking? She’s been pretty strong throughout all this, but things could change thanks to Reed’s involvement. Sharon’s been teetering on the edge of cracking all along, so she could be persuaded to confess, too.

It may fall on Phyllis (Gina Tognoni) to keep the others in line. That’d be fitting since she’s been the ringleader from the start. Phyllis is the one person in this mess who can keep her emotions out of it. She’ll undoubtedly do whatever it takes to stop Nikki, Victoria and Sharon from making a mistake that could destroy their lives.

Still, The Young and the Restless spoilers say Reed will be quite a snooper. Will he learn too much? Could he get in on this secret and be forced to keep quiet? Would Reed turn against Victoria and Nikki instead? We’ll give you updates as other Y&R news comes in. Stay tuned to the CBS soap and don’t forget to check CDL often for the latest Young and the Restless spoilers, updates, and news.