The Young and the Restless Spoilers: Rey Sabotages Kyle and Lola’s Romance – Confronts Lola with Evidence of Kyle’s Shady Past 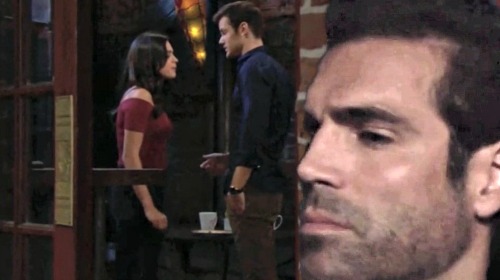 The Young and the Restless (Y&R) spoilers tease that Rey (Jordi Vilasuso) will notice Kyle (Michael Mealor) and Lola’s (Sasha Calle) growing bond. He’ll do what he does best and immediately launch into overprotective brother mode. Rey likes to watch out for his sister, which is sweet in a way. However, it seems he’s gone too far in the past.

Lola isn’t keen on repeating history, so she’ll have to put Rey in his place soon enough. Before that happens, Rey will make a shocking discovery. He’ll decide to run a background check on Kyle and he won’t like what he finds.

Y&R fans will recall that Kyle was a gravedigger not too long ago. To help with Jack’s (Peter Bergman) paternity mission, Kyle headed out to the cemetery with a shovel and got to work on Phillip Chancellor’s (Donnelly Rhodes) grave. That led to Kyle’s arrest, which is exactly what’ll raise red flags for Rey. He’ll hate the idea of Lola canoodling with a criminal.

Rey will hope he can shut Lola’s new romance down. He’ll want to pump the brakes before things get too serious. Instead, Rey will probably just add fuel to the fire. Lola’s the kind of gal who would keep dating Kyle just to prove a point. Of course, Lola legitimately likes Kyle. She won’t have to do this out of spite, but sticking it to Rey won’t hurt!

Nevertheless, Rey will definitely voice his complaints. He’ll push Lola to trust him on this, but she just won’t do it. The Young and the Restless spoilers say Lola won’t care about Kyle’s criminal record or Rey’s disapproval. She’s an adult who can date anyone she pleases. Lola will urge her big bro to get that through his head, but that’ll be tough for him.

The Young and the Restless spoilers say Rey will be keeping an eye on Kyle. One wrong move could spell trouble! Perhaps Rey will even resort to a bit of sabotage. He’ll just want to make sure Lola doesn’t get burned.

It sounds like more complications are ahead for the Rosales family. Some bombshells and blowups are looming, so don’t miss all the action. We’ll give you updates as other Y&R news comes in. Stick with the CBS soap and don’t forget to check CDL often for the latest Young and the Restless spoilers, updates and news.