BY Sean O'Brien on December 17, 2018 | Comments: one comment
Related : Soap Opera, Spoiler, Television, The Young and the Restless 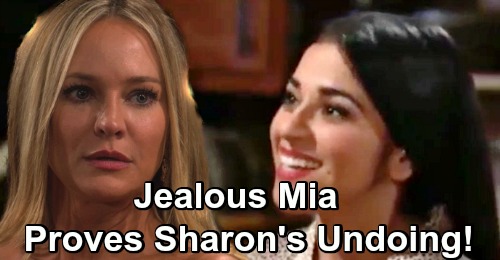 The Young and the Restless spoilers tease that Mia’s (Noemi Gonzalez) insecurity about her marriage is currently linked to Sharon’s (Sharon Case) risk of being exposed. Sharon will be the spark that sets Gonzalez’ dynamic character off as part of the evolving J.T. (Thad Luckinbill) arc.

Arturo (Jason Canela) offered wise advice to Abby (Melissa Ordway) about his former girlfriend. When hit, she’ll strike back, ugly. That bit of dialogue also felt like a telegraph for looming trouble.

Rey (Jordi Vilasuso) presented himself as available to Sharon. They kissed and appeared to be primed for a relationship until Mia arrived unexpectedly. Mrs. Rosales’ gut instinct informed her of Rey’s feelings for Sharon, which established a clear threat to the Rosales marriage.

Mia told Rey about Nikki’s (Melody Thomas Scott) recent outreach, after which he lambasted his wife. His warning was presented in a demeaning manner, as Mia told her husband that she fully understood Nikki was seeking information and influence as part of the proposed friendship.

Mrs. Rosales didn’t need to hear Rey’s condescending take following Abby’s minimization of the mobile beauty business progress at Crimson Lights. Gonzalez’ character feels like an outsider, which is likely a replay of the atmosphere in Miami, Florida.

Yes, it’s fair to conclude that Mia has alienated those close to her, as well as others, through the years. But viewers also recognize the personality type who can’t seem to do anything right, at least according to whatever the in-crowd thinks. Thus the deeper Mia-Sharon link is exposed.

Sharon has long been seen as the outsider in Genoa City, even though she’s been living there for twenty-four years. Mia, who’s equally smart and gorgeous, represents a modernized threat to the set of characters she’s been written into the story with, as well as to the existing GC establishment.

Rey warned his wife to never convince herself that Nikki is, or will be her friend. That mentality limits Mia’s ability to establish her own brand, which loosely translates to an expression of her individuality.

All Mia will need is to see Rey cavorting with Sharon, or vice versa, in an intended, romantic manner. If that happens, the lead detective’s wife will respond with unpredictable force.

Rather than putting Nikki in jeopardy, Mia would surely rather pin any J.T. related crimes she’ll become aware of on Sharon, which will then serve as punishment for crossing the line, or lines, with her husband. Case’s character may not see, or have time to prepare for Mia’s blindside. Nor will Rey, both on a personal level, or as those events are connected to his investigation.