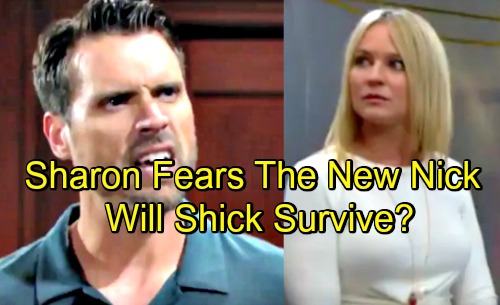 The Young and the Restless spoilers tease that Sharon (Sharon Case) will once again face Nick’s (Joshua Morrow) uneven behavior within their relationship. Fading back to Shick Part I, Nick’s bizarre J.T. (Thad Luckinbill) identity-steal scheme will force Sharon to be reminded of now on-again significant other’s erratic side.

Questions about the storyline aside, Y&R fans and Shick Part II fans in particular are rightly concerned about Sharon. She was kept in the dark about Nick’s incredible (and mostly unbelievable) plot to gaslight his father by pretending to be J.T.

The idea that Nick would be so inflamed about Victor’s (Eric Braeden) actions regarding Christian (Jude and Ozzy McGuigen) became believable only because of the reaction Morrow’s character had to a Newman Enterprises job offer.

As viewers recall, Nick made up with his dad (for the ninety-second time in recorded daytime history, wink). However, Victor’s subsequent attempt to slot Nick into the vacant Chief Operating Officer’s spot caused virulent descent.

Nick didn’t initially realize what specific role Victor wanted him to play upon returning to the fold. Vickie (Amelia Heinle) caught wind of the COO offer and immediately bee-lined to the cottage, where she let Nick have it. He honestly told his sister that he had no intention of taking that job, or that it was part of the veiled offer he’d accepted.

Victor was told in no uncertain terms that the COO slot wouldn’t be filled. In addition, Nick sternly advised the perceived Black Knight that he’d have zero contact with Christian moving forward. That spurned Victor to seek legal custody of Adam’s (Justin Hartley) son, which he temporarily won, before later losing it.

While all that was happening, Nick made an unusual threat. He told the Moustache that he’d strike at his family ties as a way to get back at him. But retaining control of Christian wasn’t all that Nick was referencing.

Seeing Morrow take off the proposed J.T. mask was very B-movieish. All viewers know that Luckinbill was the person playing the character who seemed to be resurrected. Even the most skilled Hollywoodland costume designer likely couldn’t create a mask that good. Plus, Nick’s subversive attacks seemed improbable, if not impossible to have pulled off as part of his attack.

Sharon will naturally be thrown when she learns what Nick has been dong. It will be natural to wonder if the mean streak Nick applied to Victor will, at some point, be tacked to her as well? The irony is that for years Nick had to worry about Sharon’s crazy behaviour – now

Nick will attempt to verbally assuage Sharon’s fears. But doubt about Shick’s immediate and possible longterm future will have already been reestablished. CDL is a leading source for everything linked to The Young and the Restless. Check back regularly for Y&R spoilers and news!