BY Marcy Cohen on July 16, 2018 | Comments: one comment
Related : Soap Opera, Spoiler, Television, The Young and the Restless 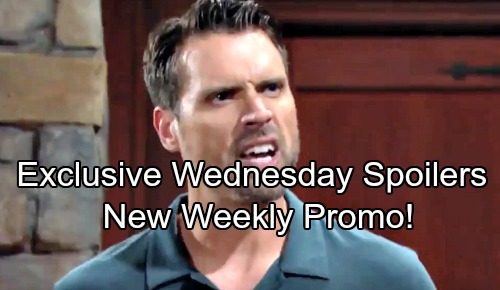 The Young and the Restless (Y&R) spoilers for Wednesday, July 18, tease that Nick (Joshua Morrow) will head down a new path. He recently resorted to a dark plot, but he got what he wanted. Christian (Jude and Ozzy McGuigen) is back where he belongs, so this protective dad’s satisfied…for now.

Despite the criticism he’s facing from his loved ones, Nick wouldn’t change a thing about Victor’s (Eric Braeden) takedown. That’s infuriating to Sharon (Sharon Case), but she may shift her attitude soon. It looks like Sharon’s anger will turn to true concern for Nick’s well-being. Once a Newman gets a little taste of darkness, it can be hard to go back!

If Nick’s new path involves another round of ruthlessness, Sharon may worry about how far he’ll take this. She didn’t sign on to marry Victor 2.0! Nick isn’t the same man these days, so Sharon will definitely have to keep an eye on him. Y&R spoilers say she’ll want to look out for herself and her children.

Of course, Victor won’t sit back and let Nick win. He’ll come roaring back and that can only lead to drama for the Newmans. In the meantime, Mariah (Camryn Grimes) and Tessa (Cait Fairbanks) will enjoy another close moment. It sounds like love’s really blooming, but everything’s just a bit too good to be true. Mariah’s set to have a blowup next week, so there could be trouble in paradise before long.

Elsewhere, The Young and the Restless spoilers say Hilary (Mishael Morgan) and Lily (Christel Khalil) will face off. They’ll get into a heated argument, which will ultimately continue in the car. The claws will come out as they hurl serious insults. Lily will even suggest that Hilary shouldn’t be a mother!

Those words should come back to haunt Lily in the near future. When catastrophe strikes, Hilary will face the worst of it. Will Lily lose control of the wheel during their fight? Will that lead to injuries and a miscarriage for Hilary? One way or another, a tremendous loss is coming by the end of the week.