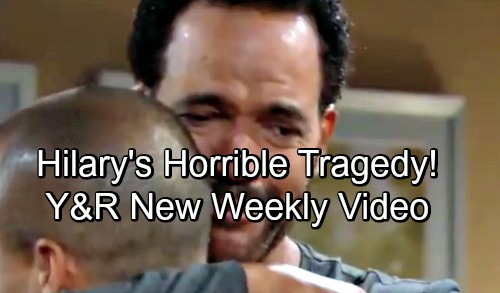 The Young and the Restless (Y&R) spoilers and shocking new promo video for the week of July 16-20 tease that the drama’s about to heat up. Things started off on a shocking note with Monday’s J.T. (Thad Luckinbill) mask bombshell. Naturally, Nick (Joshua Morrow) to face some serious backlash over that. Sharon (Sharon Case), Victoria (Amelia Heinle) and Nikki (Melody Thomas Scott) will all gang up on him for being so cruel.

Of course, Nick won’t be sorry that he fought back. He had to do something drastic or Victor (Eric Braeden) could’ve won Christian (Jude and Ozzy McGuigen) for good. However, this is now bigger than just a custody battle. Nick started a massive war, so Victor’s not going to accept defeat. Some stunning blows will hit Nick in the near future.

Elsewhere, Billy (Jason Thompson) and Summer (Hunter King) will pay the price for their deception. Phyllis (Gina Tognoni) will kick Billy out of the apartment, so that’s bound to set up more trouble. Summer will side with Billy and do her best to help him out, but Phyllis will remain furious with both of them.

Unfortunately, Phyllis could be making a huge mistake. Will her actions push Billy and Summer together? Are they destined to hook up soon? By the time Phyllis inevitably cools down, Summer and Billy could be keeping another major secret.

Other Young and the Restless spoilers say Lily (Christel Khalil) will unleash her wrath. She’ll really let Hilary (Mishael Morgan) have it as they spar in the car. Lily will declare that Hilary has no business being a mother. She’ll look pretty distracted, so is a jaw-dropping accident ahead? We know Lily will be perfectly fine, but even a fender-bender could pose a risk to Hilary’s baby.

Whatever the case, a miscarriage seems like a done deal. The Young and the Restless spoilers say Shauna (Camryn Hamm) will spread some terrible news. She’ll knock on Neil’s (Kristoff St. John) door and insist that he has to come to the hospital. As Shauna starts to cry, she’ll announce that something awful just happened.

Later, a panicked Devon (Bryton James) will rush in a hospital room. Y&R’s weekly promo also shows Devon and Neil in a close embrace. The Young and the Restless fans will definitely see some difficult moments for this family.

Finally, Tessa (Cait Fairbanks) and Mariah (Camryn Grimes) will lock lips again. Their relationship will quickly move forward, but Tessa’s deception could cause more issues down the road. We’ll give you updates as other Y&R details emerge. Stay tuned to the CBS soap and don’t forget to check CDL often for the latest Young and the Restless spoilers, updates, and news.