The Young and the Restless Spoilers: Sharon’s Moved On From Nick – Conflict With Rey Leads To Romance

BY Sean O'Brien on October 15, 2018 | Comments: one comment
Related : Soap Opera, Spoiler, Television, The Young and the Restless 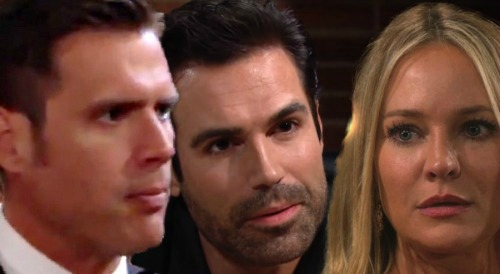 The Young and the Restless spoilers tease that the conflict developing between Nick (Joshua Morrow) and Rey (Jordi Vilasuso) is quickly pushing Sharon (Sharon Case) into a new relationship. Yes, an evolving Shey friendship appears to be supplanting Shick’s romance. And with that, Sharon’s new love may have been found.

Sharon has told Nick no on more than one occasion. Morrow’s character refuses to believe that Sharon doesn’t want him, but his feelings aren’t centered in logic.

Emotionality often impacts human minds. Mix in soap opera scripts and feelings rule the day. Such is the case with Nick’s ill-advised conflict with Rey.

Detective Rosales is impressed by Sharon. He thinks she’s a strong person and finds her to be physically attractive. No reasoned soap or real life take would discount either important evaluation.

Nick is again going off half-cocked in creating a new foe. Playing along with his developing ‘New Nick’ persona, Morrow’s character has picked a fight with the new guy in town.

For her part, Sharon is leery where the detective and her Genoa City Police Department colleague is concerned. She accepted Rey’s job pitch purely to peer into whatever develops with the J.T. (Thad Luckinbill) case. But Y&R fans see that simple is the setup to Case’s character’s new arc.

Viewers also saw that the off-again bride had plenty of whip-creamed fun with Rey and Lola (Sasha Calle) in the created apartment above Crimson Lights. Savvy soap fans know that a new set was invented in order to allow Rey to move into a space that seemingly didn’t exist.

Logistically, the second floor apartment Rey rented doesn’t seem to be above Crimson Lights, as has been stated. Instead, it may be in the back of the building that’s attached to the coffee house Nick and Sharon bought many years ago before giving it up after Shick Part I split. Though the stairway to Rey’s new place could twist, thereby putting it directly over of CL.

Who would be so picky as to delve into the minutia of where a fictional setting is located? Well, a passioned observer who believes that Rey’s apartment was obviously created to further the connection between this new character and Sharon. That threatens, or has already ended the legacy character’s link to Nick, meaning the long-awaited Shick remarriage likely won’t happen again, if ever!

Writing Rey as Nick’s adversary also pushes Sharon into Rey’s arms. Whenever and however the J.T. saga ends, Sharon seems almost certain to not serve serious jail time. Oh, she’ll chew Rey out for manipulating her, but will also, almost surely, embrace him as her post-Nick rebound.