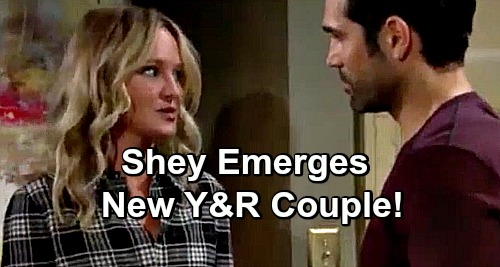 The Young and the Restless spoilers tease that Shick may have had it’s last go-round, for awhile anyway. It appears that Y&R is serious about replacing the almost-married couple, Sharon (Sharon Case) and Nick (Joshua Morrow), with a pairing that will be known as Shey.

Matching Sharon with Rey (Jordi Vilasuso) is a clear tease because this duo is increasingly possible. They’ve been written together since the then unknown Detective Rosales first saw Sharon at Crimson Lights. Case’s character has since come to develop feelings for Rey, but has generally repressed them due to Mia’s (Noemi Gonzalez) arrival from Miami, Florida.

Viewers and Nick know that he’s continued to think of Sharon, more so than Phyllis (Gina Tognoni). As for Red, who gleefully moved into what should have been Shick’s house, she’s also seen that her revived boyfriend still pines for Sharon. However, Phyllis isn’t as aware of Nick’s true feelings as he is himself.

Former executive producer and head writer Mal Young was clearly writing an option into Nick’s life. He could have Phyllis if he wants her. A different choice exists for Tognoni’s character. She can have Nick if she so desires, but also might be able to reclaim Billy (Jason Thompson).

The catalyst to all of the above though is Sharon. She told Nick, in no uncertain terms, that she couldn’t get past Phick’s revival. Sharon was truthful with Nick, stating that she loves him and that they’ll always be tied through their children.

But the shocking reopening with Phyllis last summer served to remind her of what horribly happened after Cassie (Camryn Grimes) died.

For the moment, Rey is under Mia’s spell. But he also has an option. There’s no doubt that Mia will fight hard to preserve her marriage. She does love Rey, but is also reckless with other people’s feelings, including her husband’s.

Rey seems inclined to emotionally knee-jerk into impulse passion with Sharon, soon. Sharon is single, kissed Rey before she knew he was married, and does not like Mia. Combine all factors and Shey is at least possible.

Sharon and Rey form, making Shey during the Christmas season? Nick sticks with Phyllis, who doesn’t go back to Billy because he’s repaired with Vickie (Amelia Heinle)? Maybe.  CDL is a leading source for everything linked to The Young and the Restless. Check back regularly for Y&R spoilers and news!