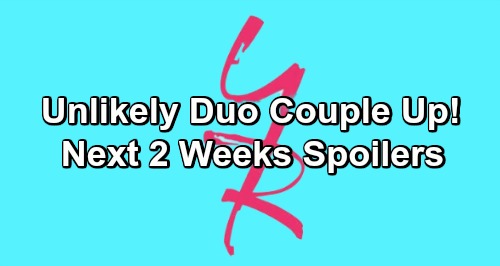 The Young and the Restless (Y&R) spoilers for the next two weeks tease that the mood will remain somber in Genoa City. During the week of December 24-28, Nikki (Melody Thomas Scott) will be tempted to walk toward the light. She won’t be able to wake up as she hears her loved ones’ voices, but Victor (Eric Braeden) will appear for a touching fantasy.

Y&R fans can expect Nikki to play the piano and eventually dance with her beloved husband. Victor will convince Nikki to stick around, but her fight will get harder when her health takes another hit. The Young and the Restless spoilers say Nate (Brooks Darnell) will have even less hope for Nikki’s recovery.

It looks like Victoria (Amelia Heinle) will take a breather from all the hospital drama to attend Sharon’s (Sharon Case) party with Billy (Jason Thompson). She may rush back to Nikki’s side when she hears Nate’s bad news. A surprising visitor will leave Victoria annoyed at some point. She’ll turn around and wonder what this mystery person’s doing in Nikki’s hospital room.

Since we know Tessa (Cait Fairbanks) will lead a candlelight vigil for Nikki, she might be the one who irritates Victoria. Tessa and Victoria clearly aren’t big fans of each other thanks to the blackmail and the kidnapping plot that left Tessa in the woods. However, Tessa may suggest a truce for Nikki’s sake. She could use all the support she can get right now.

Nikki’s ordeal will get even worse when she goes missing from the hospital! Nick (Joshua Morrow) will be frantic as he tries to track his mom down. He’ll nearly get into a brawl with Rey (Jordi Vilasuso), who may hurl accusations regarding Victor (Eric Braeden) and the possibility that he’s involved.

Over with Ana (Loren Lott), she’ll fill Fen (Zach Tinker) in on something she’s been hiding. Ana’s secret might involve a wish she’s been keeping under wraps. Christmas will also bring some tough moments for Devon (Bryton James). He’ll miss Hilary (Mishael Morgan) and the family he should’ve been celebrating with this year.

Devon will lift his own spirits with a New Year’s Eve party during the week of December 31-January 4. Sadly, Cane (Daniel Goddard) will be the one who ends the night struggling. The Young and the Restless spoilers say a shocker will strike along with the clock at midnight.

After Jill (Jess Walton) makes a comeback, Cane will find himself leaning on her. He’ll open up about how hard it is to watch Lily (Christel Khalil) suffer behind bars. Of course, Cane’s suffering as well. The loneliness is becoming tough to bear, which could lead to some temptation sooner or later.

The Young and the Restless spoilers say an unlikely duo will feel a spark. Could that be Cane and Victoria (Amelia Heinle)? She may still be feeling vulnerable over Nikki’s predicament, so it’s not out of the question. They had a bonding moment recently, so Y&R could be gearing up for a Victoria and Cane pairing. Her reservations about reuniting with Billy (Jason Thompson) could lead her elsewhere.

Finally, Reed (Tristan Lake Leabu) will come clean about being the hit-and-run driver. Will Rey (Jordi Vilasuso) hear the truth or will it be someone else? We’ll give you updates as other Y&R news comes in. Stay tuned to the CBS soap and don’t forget to check CDL often for the latest Young and the Restless spoilers, updates and news.