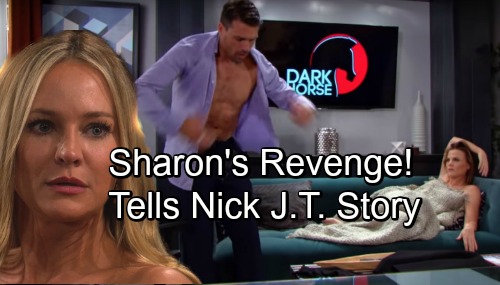 The Young and the Restless (Y&R) spoilers tease that Phyllis (Gina Tognoni) and Nick (Joshua Morrow) will continue their sex sessions. Their relationships are over, so they see no reason to hold themselves back. However, Phyllis is actually playing with fire here. If she’s not careful, she just might get burned!

Y&R fans know Phyllis has been in plenty of storylines lately. She’s been busy wrecking romances and becoming Jabot’s newest CEO, but her most important story involves a deadly cover-up. For Phyllis and the rest of the girls’ night gang, that needs to be the priority.

Unfortunately, Phyllis has already been slacking off on their top-secret meetings. Between helping Jabot meet their deadlines and sleeping with Nick, it doesn’t leave much time for anything else. Phyllis has always been the ringleader, but she may continue to drift away. That’s a terrible idea since this secret could slip away from her.

Sharon’s the weakest link anyway, so Nikki (Melody Thomas Scott), Victoria (Amelia Heinle) and Phyllis have had concerns about her. She nearly came clean to Nick before the wedding, but there was no need after the betrayal bombshell. Sharon had previously wanted to start off their marriage with an honest clean slate. Once that wasn’t an issue, it seemed the secret would be safe.

Of course, things could change thanks to Nick and Phyllis’ new arrangement. When Sharon gets updates, you can bet she’ll be appalled. After everything, Phyllis and Nick still can’t stay away from each other. Sharon’s sure to hit the roof and when she does, some explosive revelations could come out.

Perhaps Sharon will decide to expose the J.T. (Thad Luckinbill) cover-up drama. She’ll probably assume Nick wouldn’t squeal on Nikki and Victoria, so she might as well let him know what’s up. Sharon won’t care if Nick gets angry. They’re not together anymore, so why should she?

Besides, Sharon wanted to confess on more than one occasion. Phyllis started all this and pushed the gang to keep the lie going. If this is going to blow up in anybody’s face, it needs to be hers. The Young and the Restless spoilers say Sharon may blab to Nick and cause another round of infighting. This also affects Victoria and Nikki, so the conflict may get ugly.