The Young and the Restless Spoilers: Summer Proves To Be Billy’s Downfall – Jack Takes Over After Abbott Status Confirmed 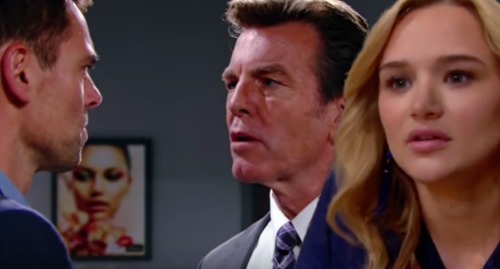 The Young and the Restless spoilers tease that Billy (Jason Thompson) will lose both his personal relationship with Phyllis (Gina Tognoni) and his spot as Jabot’s Chief Executive Officer this fall. Summer (Hunter King) will prove to be the reckless force that knocks Thompson’s character out.

Summer’s thoughts are split. Her belief in Phyllis being better off with Jack (Peter Bergman) is actually positive.

Many tenured Y&R fans were able to see beyond Michelle Stafford’s initial version of Phyllis and Billy Miller’s great edition of Billy. These hardcore fans, including this scribe, took a second look at Philly as it was forming the first and second times and decided that yes, this era’s version of both characters does work.

However, Summer isn’t a real life person. The former Snowflake (Mariah’s, Camryn Grimes, apt term), has been written to tart stature upon her return to the show. King was good in her original character’s form and is being given a chance to demonstrate another element within her range now.

Different than the Phyllis-Billy assessment and reassessment, this scribe is trying to remain open-minded about seeing Summer behave as she is. It feels forced, but more time is willing to be offered because the suspension of disbelief scenario is key to escapist fiction, which is what allows all soaps to flow.

So, Summer finally kissed Billy. He didn’t like it. But Billy also didn’t immediately call Phyllis, which seems to further his coming relationship doom.

On this plot point, Y&R is being chided. Billy’s brashness in all things doesn’t match with his timidity in withholding such crucial information from Phyllis. There appears to be no way to write this mistake back. So, in driving to this climax, fans just need to accept where they’re being led.

Philly most likely ends when Summer ensures that her mother knows about Silly, which involves Summer’s hope to link herself to Billy for a non-commitment. Though one wonders if Billy and Summer might last considering that neither character will have anyone to turn to in the near future?

Billy is sure to be distracted and distraught when Philly fizzles. His enemies, which include nearly everyone in the building, will strike during his weak period. A best guess would see Jack gloriously (yes, that’s a wink to the input of his cohort Gloria, played by the great Judith Chapman) reclaiming the Jabot throne after he somehow confirms his always-an-Abbott status.

Phyllis leaves Billy. Jabot kicks Billy out. He’ll be alone and unemployed. Hello, Summer, if the brat still wants him after the plot climax. CDL is a leading source for everything linked to The Young and the Restless. Check back regularly for Y&R spoilers and news!