The Young and the Restless Spoilers: Summer Wants To Double Down – Phyllis Ready For Billy Battle 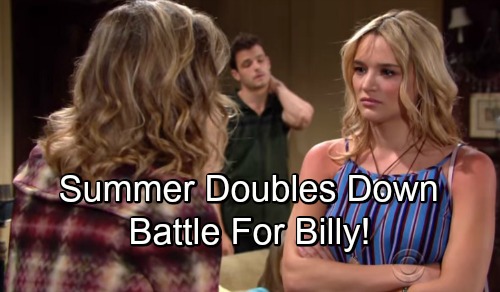 The Young and the Restless spoilers tease that Summer’s (Hunter King) time on Jaboat hasn’t changed her obsessed perspective. She wants Billy (Jason Thompson) and believes she can get him. But Phyllis (Gina Tognoni) is awake and engaged.

Was the last word in the headline to this feature and in the last sentence of the above paragraph a wink at an engagement ring? Why, yes.

Billy has already proven to the audience that he is not romantically interested in Summer. No matter how much she shamelessly flaunted her body, Billy rejected all tawdry offers. Good for him!

Now, the self-tagged screw-up needs to cement his real relationship. Billy should ask Phyllis to marry him. An engagement wouldn’t push Summer off, as she’d likely continue with her indecent assaults. But that sincere commitment would further cement Philly.

Billy was smart to take Phyllis to the Abbott house while Summer was contained on the Jabot yacht. Moving out of the condo, Philly should have left a handful of months ago, was absolutely necessary.

Kyle learned about Summer’s plan to go to Philadelphia and force herself upon Billy. That scheme made many wonder why Summer has so little respect for herself? She is an attractive woman in the early prime of her life who could have a relationship with Kyle, or many other eligible bachelors. So why the mad make on Billy?

Phyllis’ fierce, face-slap effectively ended the motherly relationship she had with Summer. She’s Supergirl no more. Hopefully, Nick (Joshua Morrow) will be told all so that he too can join the fight to save Phick’s daughter’s soul.

The seemingly likely double-down, whereby Summer will actually increase her efforts to make Silly become a reality, feels like the next stop in this storyline. The unwanted result, where Summer either actually gets Billy, appears setup by the poker game Sinead (Lira Kellerman) coerced Thompson’s character into joining, via Kyle’s prod.

Kyle and Ashley’s (Eileen Davidson) desire to oust Billy from Jabot could easily allow Summer to pounce. While Jack (Peter Bergman) isn’t involved in the specifics and holds no will will against King’s character, he stands to benefit from another Billy collapse.

There are basically three Abbott’s who want Bill to fall. Their only rival is Phyllis, who believes the Philly pairing is strong enough to overcome anyone’s resistance. Oh, there is Billy as well. He figuratively and literally holds the cards as Summer’s game evolves.