The Young and the Restless Spoilers: Tuesday, September 4 Update & Recap – Lily Heads to Prison, Bids Farewell to Her Family 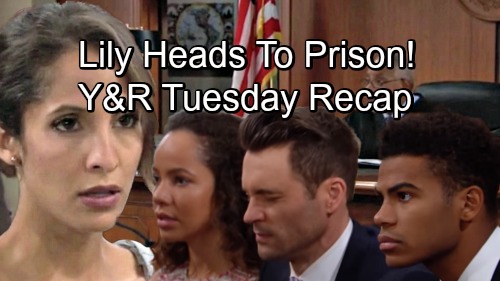 The Young and the Restless (Y&R) spoilers for Tuesday, September 4, tease that Devon (Bryton James) will have a change of heart. In court, he’ll tell the judge that this isn’t what Hilary (Mishael Morgan) would want. Devon will argue that Lily’s (Christel Khalil) going through enough with all her guilt and regrets. He’ll think that should serve as her only real punishment.

The judge will take another recess to mull over Devon’s speech. Christine (Laralee Bell) will feel like Devon’s loved ones pushed him into this, but Lily will just be grateful. She’ll let Devon know, but he’ll reiterate that forgiveness isn’t possible. Devon just can’t get past the crash and all the damage that’s been done.

After Devon exits the courtroom, Cane (Daniel Goddard) will follow him. He’ll convince Devon to return for Lily’s sentencing. The Young and the Restless spoilers say the judge will come back with a new point of view. He’ll admit that Devon’s words changed his decision, but he’ll still want justice for Hilary and her unborn child.

Y&R fans can expect prison time for Lily. She’ll get a steep fine, community service and 12 months behind bars. As Lily bids her loved ones farewell, Devon will offer an apology. He’ll assure Lily that this isn’t what he wanted, but she’ll feel like his speech was far more than she deserved.

Other Young and the Restless spoilers state that Sharon (Sharon Case) will voice concerns about Tessa (Cait Fairbanks). During a chat with Mariah (Camryn Grimes), Sharon will object to Tessa staying at the house. Tessa will walk in on their conversation and promise that she’s not sticking around. She’ll be thankful they let her crash there for the night.

Once Sharon leaves, Mariah and Tessa will revisit their money discussion. They need to raise the $20,000 that Tessa owes ASAP. The Young and the Restless spoilers say Tessa will reflect on her complicated life. She’ll understand if it’s too much to handle, but Mariah will insist that she wants to be together. They’ll just have to move slowly.

Later, Mariah will work on getting another apartment for Tessa. She’ll approach Sharon and wonder if Nick (Joshua Morrow) can make it happen. Sharon will once again hint that Mariah should be careful, but Mariah will contend that she isn’t rushing into anything. Still, she’ll want to help Tessa as much as she can.

Mariah will push Sharon to give Tessa a job at Crimson Lights. That’ll earn Tessa’s deep gratitude. She’ll suggest that she doesn’t want to let Mariah down, but more trouble could be brewing! We’ll give you updates as other Y&R news comes in. Stick with the CBS soap and don’t forget to check CDL often for the latest Young and the Restless spoilers, updates and news.