The Young and the Restless Spoilers: Team Phyllis or Team Summer – Who Should Win Mother-Daughter War?

BY Heather Hughes on August 18, 2018 | Comments: one comment
Related : Soap Opera, Spoiler, Television, The Young and the Restless 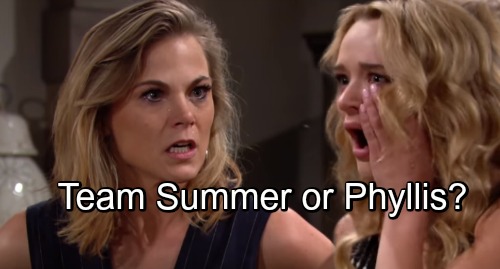 The Young and the Restless (Y&R) spoilers tease that Summer (Hunter King) will plan the last phase of her seduction plan. She’s been inching Billy (Jason Thompson) toward the bedroom for a while now, but she’ll expect to seal the deal soon. Y&R fans know Summer’s stubborn, so she’ll continue to ignore Billy’s pleas to leave him alone.

When Summer hears about Billy’s business trip in Philadelphia, she’ll decide to follow him. Summer will hope to make a sexy pitch without pesky Phyllis (Gina Tognoni) around.

She’ll believe a hot night is on the way, but Kyle (Michael Mealor) will get the scoop and botch the plot. The Young and the Restless spoilers say Kyle will tell Phyllis and hope that she can stop Summer from making a mistake.

Once Phyllis knows the lengths her daughter will go do, she’ll be totally enraged. Summer seems to think she’d be a huge upgrade for Billy. After Phyllis confronts her about the Philadelphia scheme, Summer will lash out and hurl some infuriating insults. She’ll make it clear that Phyllis deserves every bit of her suffering.

Summer will suggest that this is just what happens to women like Phyllis when they get old. What a burn! Phyllis will refuse to let her daughter talk to her like that. She’ll give Summer the ultimate slap, which should be supremely satisfying for Y&R viewers.

Summer’s fun sometimes, but she can also be incredibly obnoxious. She could certainly use a whack across the face on any given day.

Of course, Summer’s right on some level. Phyllis kicked Billy out and had sex with Nick (Joshua Morrow) almost immediately. Her history is obviously a mess, too. It’s not like Phyllis set some shining example for Summer to follow.

Perhaps it’s her own fault that Summer turned out like this. Phyllis is a lot of things, but a good mom probably isn’t one of them.

Still, Summer shouldn’t be trying to seduce Phyllis’ boyfriend. That’s especially true when Kyle’s practically begging to sleep with his ex. Why is Summer wasting her time with Billy when Mr. Perfect Six-pack himself is willing and able? This is obviously about making Phyllis pay, so Summer’s just as despicable as her mother.