BY Olivia Marie on December 15, 2018 | Comments: one comment
Related : Soap Opera, Spoiler, Television, The Young and the Restless 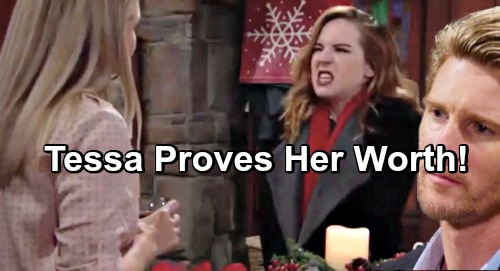 However, on soap operas, things are not always how they appear and they often flip the storyline on a dime. It looks like there could be a Tessa redemption in the Y&R future.

Let’s face it, Mariah has every reason to feel angry with Tessa. She lied to her and mislead her. And, right now, it looks like she may have used her. However, that may not be the truth. Mariah wants to believe Tessa loves her and she wants to be with her. But, that little voice in her head keeps telling her that her romance with Tessa is worth the fight.

Tessa has professed her love for Mariah over and over again. Tessa has told Mariah she chooses a life with her over everything else. Tessa opened up to Mariah and she explained her behavior and how she has never had someone like Mariah in her life—someone that is willing to fight for her and love her unconditionally.

The Young and the Restless spoilers suggest Y&R writers have something in mind for this couple. Instead of killing Tessa off or having her run off to another town, they plan to redeem the character and start building something meaningful with Mariah.

Tessa will prove her love for Mariah. She will make sure Mariah knows that she loves her and she wants to be with her and her only. Mariah will follow up with a heated exchange with her mother, Sharon and she lets her know she cannot treat Tessa like they have.

The Young and the Restless spoilers reveal that Mariah will point out that none of the cover-up crew have any room to talk as they have so many skeletons in their own closets that they need to rent a storage unit to hold them all!

Do you want to see Tessa and Mariah make it work? Do you think Tessa deserves a second chance? Don’t forget to come back to CDL later for more The Young and the Restless (Y&R) spoilers, news, and casting updates!