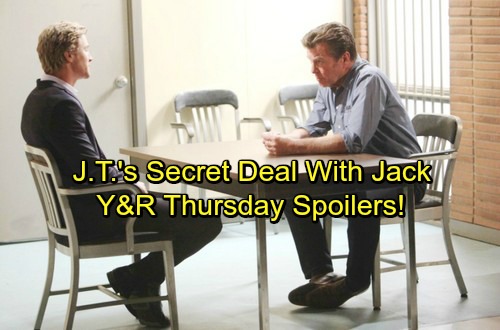 The Young and the Restless (Y&R) spoilers for Thursday, April 5, tease that Phyllis (Gina Tognoni) will visit Jack (Peter Bergman) once again. She’ll get a bit harsh with him during their chat, but she’ll feel like it’s for his own good. Phyllis may argue that Jack won’t beat the charges if they can’t find the real culprit. She’ll want Jack to understand how serious this situation is.

Billy (Jason Thompson) recently hired a private investigator, but there’s no way Phyllis will be able to avoid digging around herself. She might urge Jack to get extra help, too. They need all hands on deck if they want to get Jack off the hook.

The Young and the Restless spoilers say J.T. (Thad Luckinbell) will meet with Jack at some point this week, so it’s possible Jack will make a secret deal to have J.T. on the case. After all, J.T. has some investigative skills. Those skills are apparently terrible since J.T. couldn’t come up with anything solid on Victor (Eric Braeden), but they’re skills nonetheless.

Besides, Jack has to work with what’s available to him. He might want J.T. to pitch in on a Kyle (Michael Mealor) investigation as well. Jack’s definitely worried about the fate of Jabot now that his sneaky son’s in charge.

Other Y&R spoilers state that Nick (Joshua Morrow) and Sharon (Sharon Case) will be at odds. It appears Sharon will inadvertently push the wrong buttons. Nick’s distraught over Victor’s (Eric Braeden) life and death condition at the moment, so he’ll undoubtedly be on edge.

This confrontation probably won’t be Sharon’s fault, so Nick may offer an apology eventually. The Young and the Restless seems to have set up a “Shick” reunion, so they need to keep moving toward that goal. Elsewhere, Victoria (Amelia Heinle) will make a positive move. She might stand her ground with J.T. on the counseling issue and insist that he needs to put in the work.

Of course, Victoria could also pick up on some strange vibes. She needs to keep her eyes and ears open for clues about J.T.’s guilt. He shoved Victor down that staircase and he’s bound to get caught sooner or later.

It looks like the action’s revving up in Genoa City. We’ll give you updates as other Y&R news comes in. Stay tuned to the CBS soap and don’t forget to check CDL often for the latest Young and the Restless spoilers, updates and news.