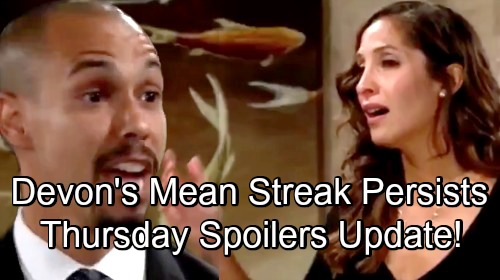 The Young and the Restless (Y&R) spoilers for Thursday, August 16, tease that Summer (Hunter King) and Phyllis (Gina Tognoni) will spar over the cheating drama. Phyllis will assure Summer that she simply made a one-time mistake with Nick (Joshua Morrow). She’ll push her daughter to keep quiet, but Summer will think Billy deserves the truth.

Talk will turn to Phyllis’ other betrayals over the years. Summer will point out that her mom’s unfaithfulness is the reason she even exists. They’ll bicker until Summer heads for Jabot. She’ll insist on telling Billy what happened, but Phyllis will rush over to his office as well. They’ll both hope to put their own spin on the story.

As luck would have it, Billy will be stuck in meetings elsewhere. After Gloria (Judith Chapman) fills them in, Summer and Phyllis will vow to wait. They’ll end up continuing their argument and diving deeper into their issues. Phyllis won’t get the drastic change in Summer’s personality. She’ll contend that not caring what anyone else thinks isn’t a good long-term plan.

Phyllis will feel like it’s time to reset their mother-daughter relationship. She’ll push Summer to let this go and try to strengthen their bond. Summer will suggest that’s just a manipulation tactic. However, she’ll promise not to stand in Phyllis and Billy’s way if they can survive this blow.

At the Dive Bar, Nick (Joshua Morrow) and Marah (Camryn Grimes) will discuss wedding plans. After Mariah takes off, Phyllis will appear with terrible news. She’ll inform Nick that Summer knows the truth, so he’ll be in shock. Phyllis will contend that Summer seems to be going after Billy for herself. She’ll hope that Nick can somehow come up with a solution and fix all this.

Nick will indeed give it his best shot later. He’ll track Summer down and give her his version of events. The Young and the Restless spoilers say Nick will want to put this sex blunder behind him. He’ll maintain that Sharon (Sharon Case) is the only woman he wants, but Summer won’t be so sure they’re right for each other.

After Nick gets nowhere with his daughter, he’ll end up writing her a check and handing it over. Nick will count on it being enough to keep the secret under wraps. At Hamilton-Winters, Cane (Daniel Goddard) will reach out to Lily (Christel Khalil) again. He’ll be upset that she’s been ignoring his efforts to contact her.

Lily will feel like Cane isn’t accepting the gravity of the situation. She’ll give Cane orders on what to do if she lands behind bars, but he’ll refuse to throw in the towel. As Lily breaks down in tears, Cane will pull her close. Y&R spoilers say Devon (Bryton James) will walk in and make it an awkward moment.

Cane will believe this is a good opportunity for Devon and Lily to chat. He’ll exit so they can have an honest conversation. Lily will hope to ease the tension, but Devon won’t soften toward her. As he turns to leave, Lily will admit that she misses him. That’ll cause Devon to pause briefly, but he’ll still depart in silence.