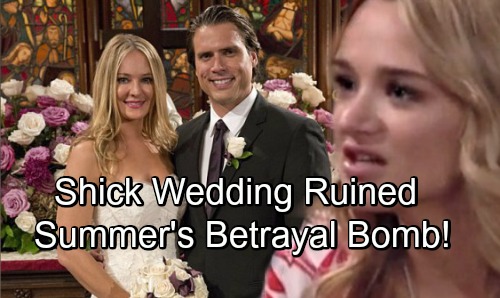 The Young and the Restless (Y&R) spoilers tease that Summer (Hunter King) will get an admission from Phyllis (Gina Tognoni). Her mom will admit she hooked up with Nick (Joshua Morrow), but she’ll want Summer to keep her mouth shut. Of course, Summer won’t do that without a little incentive. Nick will write a check that leaves Summer satisfied, so she’ll accept the hush money.

However, there’s nothing to stop Summer from coming back for more. She’s obviously the type to get greedy. Things could head downhill if Nick refuses to hand over anything else. Summer could also just cash the check and spill the secret anyway. She’s already on Phyllis and Nick’s bad side, so she may not care about causing more damage.

Summer can’t hide her displeasure about Nick and Sharon’s (Sharon Case) upcoming wedding. She couldn’t have been nastier while trying on bridesmaid dresses at the ranch. What better way to stop the festivities than to drop the cheating bomb at the wedding?

Part of Summer may think she’s doing Nick a favor. She feels like he wouldn’t have slept with Phyllis if he was truly devoted to Sharon. Summer might believe coming clean would be in her dad’s best interest. Nevertheless, Summer always has a more sinister agenda. Her main goal seems to be going after Billy (Jason Thompson), so a wedding spectacle might help with that.

Billy would be publicly humiliated over Phyllis’ betrayal, which would make forgiveness even more difficult. He’d be angry with Summer for exposing the secret in front of everyone, but she could handle that. Summer might plan on letting her body overcome any lingering obstacles.

The “Philly” breakup could put Summer one step closer to winning her bet with Kyle (Michael Mealor). Billy may find himself feeling both vulnerable and vengeful, so Summer would have him right where she wants him. It wouldn’t take much for Summer to lure Billy to her bed.

The Young and the Restless spoilers say the hookup revelation will bring drama for Nick and Sharon, too. It’s doubtful that their romance can survive what’s in store. Will Nick and Phyllis find their way to each other? That’s an option since Sharon could grow closer to Rey (Jordi Vilasuso), a mysterious new man in town.

As for Phyllis and Summer, this shocker could change their relationship forever. Their mother-daughter bond may be damaged beyond repair. It sounds like Summer will continue to make major waves in GC, so The Young and the Restless fans will want to stay tuned. We’ll give you updates as other Y&R news comes in. Stick with the CBS soap and don’t forget to check CDL often for the latest Young and the Restless spoilers, updates, and news.