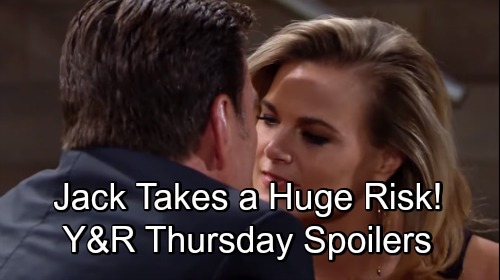 The Young and the Restless (Y&R) spoilers for Thursday, August 9, tease that Summer (Hunter King) will have high hopes. She’ll believe a major victory’s on the way, so she’ll continue her manipulation. Summer will put a few more pieces of her plan in play and stay focused on her goal. It seems Summer’s only mission right now is to wear Billy (Jason Thompson) down and finally score a sex session.

Ever since Summer returned to Genoa City, she’s been adamant that Billy and Phyllis (Gina Tognoni) wouldn’t last. Summer also told Jack (Peter Bergman) that he was the better match for her mother. Of course, all of that was part of Summer’s strategy. She’d so just about anything to stir up “Philly” doubts and drive them apart. Summer’s obsessed with getting Billy in bed, so she’s really playing dirty.

The Young and the Restless spoilers say Summer will make another shocking move on Thursday’s new Y&R episode, August 9. We know Summer will steal a kiss from Billy before the week’s over, so maybe it’s time for that lip lock. Summer could also choose to reveal her suspicions about Jack. She mistakenly believes he’s mystery guy who slept with Phyllis, so that bomb could bring plenty of drama.

However, Phyllis and Billy will face some problems beforehand. Thanks to the boutique project, another “Philly” fight will erupt. They’ll be in a rocky place romantically, so Summer may see her chance to slide right in and achieve her objective.

Meanwhile, Phyllis will break down in tears over her relationship issues. She desperately wants to work things out with Billy, but they tend to take one step forward and two steps back. No matter how many times they make amends, something always blows them up again.

The Young and the Restless spoilers say Jack (Peter Bergman) will track Phyllis down in Thursday’s episode. He’ll realize she’s upset, so he’ll want to offer support. Phyllis will be moved by Jack’s deep concern for her. She’ll be grateful for how much he lifted her up throughout Hilary’s deadly ordeal.

Since Jack will even console Phyllis over Billy, she’ll be beyond impressed. Their warm moments will prompt a confession from Jack. He’ll admit that he couldn’t just turn off his feelings for Phyllis. Y&R fans can expect Jack to take a huge gamble and plant a steamy kiss. When you combine that with Summer’s wrong assumption, there’s bound to be big trouble!